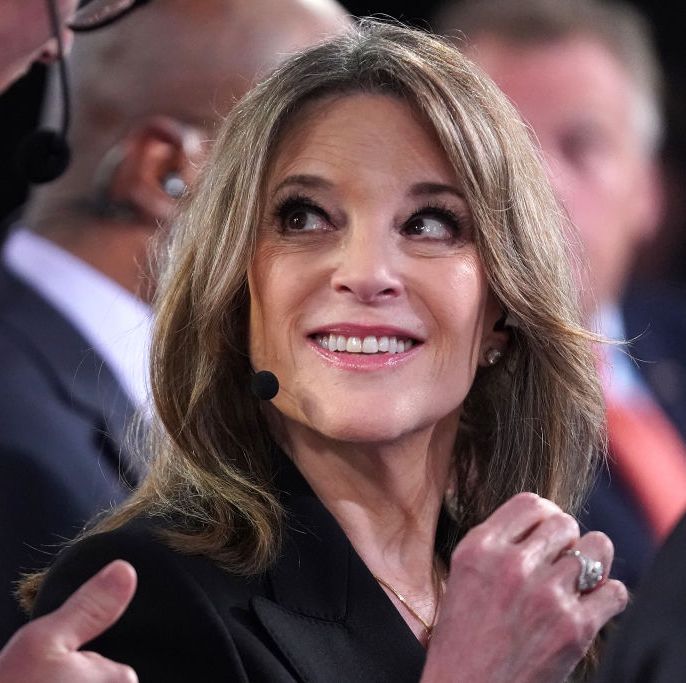 Maybe I’ve listened to too many SuperSoul Sunday podcast episodes, but the derisive response to Marianne Williamson after the first Democratic debate surprised me. Perhaps I thought that all her love talk and spiritual open-mindedness had gone mainstream, but the mocking memes that followed were a rude awakening.

Articles and tweets quickly positioned the presidential candidate as some sort of New Age space cadet with no handle on reality, and the words “woo woo” were used too often in reference to the New York Times best-selling author.

Cut to the second round of debates, which aired Tuesday and Wednesday nights this week. Though Williamson was given only nine minutes to speak (less than half of many of her counterparts), she arguably made the biggest impact. She was the most Googled candidate in 49 states, with GOP pollster Frank Luntz claiming, “She’s cutting through the clutter tonight.”

Still, the memes continue. Some articles claim her rise is “scary,” while Twitter users label her “crazy,” and The Daily Beast refers to her approach as “New Age-y schtick.”

Here’s the thing: In a time when American children are being gunned down in schools and where the mortality rate for babies on their first day of life is higher in the United States than any other developed country, stating that you want children to grow up happy shouldn’t be cause for snickering.

Throughout her campaign, Williamson talks more about ideas than plans. Some people might see that as an inability to lead, but when inciting the darkest parts of humanity helped win the previous election, trying to appeal to the light side doesn’t sound like such a bad idea. In other words, it’s not so much people’s response to Williamson the person as it is to her philosophy that I find unsettling. She’s doing her best to move the conversation to one of peace and love instead of anger and division. What is so laughable about that?

Williamson said, “If you think we’re going to beat Donald Trump by just having all these plans, you’ve got another thing coming. Because he didn’t win by saying he had a plan. He won by simply saying ‘make America great again.’” It was never about taxes, or keeping your gun, it was about resuscitating the ugliest parts of America. And it worked.

The candidate opened last Tuesday night’s debate saying, “We the American people must rise up and do what we do best and create a new possibility, say no to what we don’t want and yes to what we know can be true.” This doesn’t have the same ring as “no new taxes,” but that didn’t work out so well in the end anyway.

Campaign promises—plans for Medicare, plans for how to curb climate change—are great. But promises without a fundamental shift in thinking will simply become empty promises. Williamson is trying to teach us that our mind-set needs a new baseline, one of true empathy, so that it becomes impossible to deny people basic health care, so that Americans would never for one second think that separating breastfeeding mothers from their infants at the border is in any way acceptable.

Williamson’s words make a lot of sense. “The racism, the bigotry, and the entire conversation that we’re having here tonight,” she started, “if you think any of this wonkiness is going to deal with this dark psychic force of the collectivized hatred that this president is bringing up in this country, then I’m afraid that the Democrats are going to see some very dark days.”

Reflect on the words of Martin Luther King Jr. who said, “Darkness cannot drive out darkness; only light can do that. Hate cannot drive out hate; only love can do that.” Those words were said more than 50 years ago. My hope would be that we live in a time when they are met with understanding and acceptance instead of memes. I’m not here to ask you to vote for Williamson, but I am here to ask you not to call her crazy.