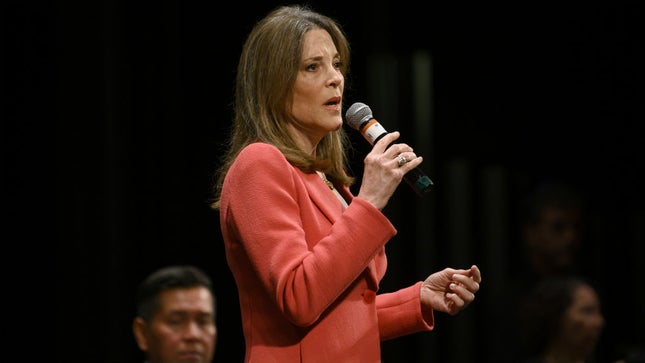 Author and Democratic presidential candidate Marianne Williamson on Monday proposed the creation of a Cabinet-level Department of Peace as president.

The department would have to be created through an act of Congress and would "work actively and interactively with every branch of government on policy matters related to both international and domestic peace issues," according to Williamson's campaign.

Explaining the value of "expertise in peacebuilding" to the Des Moines Register, Williamson told the newspaper the military was akin to a surgeon.

"Obviously, the United States needs to have the best surgeons in the world, but everyone knows you only have surgery if you absolutely must," she said.

The proposal would also establish a "Peace Academy" modeled after military academies that would require five years of service in public service programs geared toward nonviolent conflict resolution. The secretary of peace responsible for oversight would serve on the National Security Council, according to Williamson.

The department's domestic duties would include educational programs for children as well as addressing the so-called school-to-prison pipeline and improving relations between police and local communities.

Internationally, it would collaborate with other governments to resolve international conflicts, emphasizing areas such as education, health care and food insecurity, according to Williamson.

"Our country's priorities are clearly reflected in our budget. The Defense Department has a military budget of $718 billion - almost larger than that of all other nations combined - while our State Department budget - including all peace-creation agencies - is $40 billion," the proposal states.