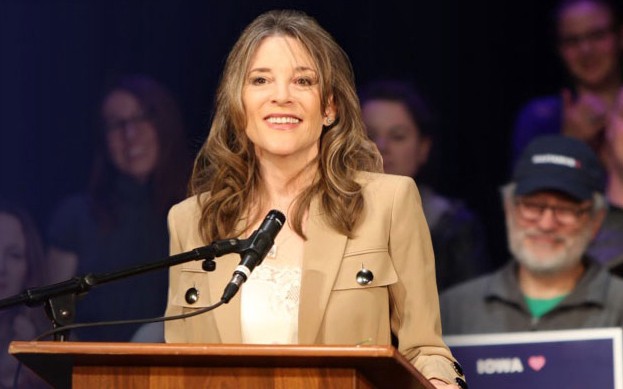 I first heard of Marianne Williamson in 2003 when she spoke at a popular resort in the Poconos, but it wasn’t until 2012 that her words changed my life.

It was in early 2012 that my mother passed away and my entire life was turned upside down. My mom was a single mother, my best friend, and my business partner — pretty much my whole world for 38 years.

Immediately, I had to move across the country to settle her estate, her debts and liquidate 69 years of belongings, while simultaneously running my small travel business. During a 6-month time frame, the rest of my world quickly imploded; I broke my foot, my cat died, I ended a 4-year relationship, had emergency dental surgery, lost a $50,000 contract due to Federal budget cuts, a former business partner threatened to sue me and the self injection drugs I was taking for my Multiple Sclerosis were physically draining and doubling in price … oh and then there was the catastrophic water leak that necessitated a full condo remodel and mold remediation to put the house on the market. I became a general contractor overnight.

Between the grief and dealing with all of the external events and living in a hotel and eating fast food for 2.5 months, I was in a weakened emotional and physical state. A friend of mine gave me the book “Feel the Fear & Do it Anyway” by Susan Jeffers, and thus my self-help journey began as I voraciously read anything I could find on grief, moving forward and facing fear. Eckhart Tolle, Wayne Dyer, Louise Hay, Michael Singer, Gerald Jampolski were authors with spiritual views and ideas on life I had never considered. Meditation was a life-saver.

Inclusivity appeals to me. I found Marianne Williamson’s books just before she hit “big-time” on Oprah’s Super Soul Sunday. Although she spoke in some Christian terms as it pertains to “A Course in Miracles,” she also talked about Buddha and Mohammed, Alcoholics Anonymous, the Universe and whatever Higher Power you believe in. That was easy, I had none.

I’m not a religious person. In fact, I have a finely tuned “cult-o-meter” when it comes to people or groups trying to get me to drink their “Kool-Aid.” I’m sure between my grandmother forcing me to go to her church’s bible study or various friends who invited me to Jesus Camps cloaked as “The Cool Teen Camping Trips,” I cultivated a healthy skepticism for anything that claims to have a monopoly on the truth. “A Course in Miracles” didn’t claim any dogma or doctrine, so I listened with open ears.

What I learned over the last 8 years of attending Marianne’s lectures and reading her books, is that forgiveness, love, hope, faith, kindness, patience and integrity are the things that free us from the anxiety and the fear we all live with on a daily basis and allow us to work through even the hardest of relationships with others — or with ourselves. “The thinking of the world is 180 degrees” from these qualities and is at the root of all hate, despair, and pain inflicted on others. It’s our egos that are the enemy, not each other. Most of the major religions and spiritual gurus of the world would agree.

One of the most powerful experiences I had was live-streaming her lecture 3 or 4 years ago on race relations where she asked everyone to stand and hold hands and in a mass way, invited the white people in the room to apologize to the brown and black people in the room for the historical injustices perpetrated against them. It was a group meditation and there was not a dry eye in the room, or in my case a dry screen. No one was taking responsibility personally but rather acknowledging the deep unhealed wound, the elephant in the room. Racism is a blight on our society and holding us back and until we heal that, we rinse and repeat the cycle. Marianne was the first one to introduce reparations as a 2020 election issue — it caught on like wildfire and the other candidates starting adopting her language in addressing their positions on it.

Our country was founded on the principle of separation of church and state, and yet “In God We Trust” is printed on every dollar; the abolitionist and suffrage movements arose from the Quakers; the civil rights movement rose up from Martin Luther King, Jr. and the Southern Baptists. At a very basic level, church and state will always intersect because most religions share one common principle and that is “Love Thy Neighbor” and governments are created to serve the needs of you and your neighbors. Governments that “don’t love thy neighbor” commit unfathomable atrocities, jail and starve their people, wage constant war and discriminate on color, sex, and religion — sound familiar?

So that brings me to Election 2020 and Marianne Williamson. The smear campaign against her to thwart her chances to rise in the polls is stunning. They are painting her as anti-science, she is not: painting her as anti-vax, she is not; sound biting tweets and quotes out of the full context to portray her as some hippy-dippy witchy-poo we should dismiss and ignore. Seems her critics are clutching their pearls thinking she’s got a voodoo doll collection, but the truth is the critics are the ones sticking the pins in.

I can say with certainty that no one writing an anti-Marianne Williamson piece has checked her website to see she has actual policy and plans and positions on all the major issues, or even heard her speak for more than a few minutes, or read an entire book or stayed after a lecture to see her cry with those grieving or dance with those celebrating. Most of the pieces cite old and new agey sounding tweets out of context for which she has explained or apologized if they were misunderstood.

I’m sure she’s done well with selling books but money is not her motivation in the slightest. Girlfriend has like 5 outfits total. She’s super frugal and tres fabulous. If greed was her motivator, she wouldn’t have founded and volunteered for charities for decades; if it was, she would turn away people who come to lectures and can’t pay the suggested admission; if it was, she wouldn’t give away countless free books and workshops to those in need and if it was, she wouldn’t throw voting drives, coat drives, toy drives, political events and fundraisers for progressive candidates all over the United States to affect change in Congress. (I was a big Bernie supporter 4 years ago. Did you know Marianne Williamson held campaign events for him even before he announced?).

But society is so jaded that we can’t believe someone would actually want to run for President who doesn’t have a secret agenda, or hasn’t been bought by the NRA or doesn’t have an ego the size of Greenland. Guess what, we have that candidate and it’s Marianne Williamson. No, she’s not just trying to sell books; no she’s not just trying to elevate the conversation; no, she doesn’t accept corporate money and no she’s not trying to get you to join a cult or cure your cancer with crystals. She actually loves America and wants to put it back on track, as we all do. Getting money out of politics has been her constant battle cry for as long as I have known of her. Until we do that, we can never know someone’s true colors and whether they have our best interests at heart.

The DNC has decided there’s only 3 or 4 viable candidates, candidates who do in fact take that corporate money and will always take center stage — and quite literally center stage at the debates. The other candidates are considered a distraction and fluff by both the DNC and the press. Williamson has called this out saying, “there’s an ancient strain of misogyny that labels any woman who doesn’t toe the line with the status quo of her time as crazy or dangerous. Twas always thus. We will not have full empowerment of women until we face that head-on.”

Case in point, if the Pope or even Deepak Chopra were running for election, none of their beliefs like “we all go to heaven” or “meditation changes your brain chemistry” would be questioned. Whether it’s Catholicism or New Age Spirituality, their beliefs have been folded into the mainstream as “faith-based facts,” but yet Williamson gets coined “The Orb Queen” and mocked for even questioning the fiscal role of pharmaceutical and chemical companies in our opioid or environmental crisis, or using meditation i.e prayer and visualization to aid in healing illness?

A single mother herself, she is someone to trust and take seriously. She wants to focus on peace building, education, supporting our children, technology and tackling our environmental crisis. She is the smartest person in the room; philosophy, history, geography, psychology, the list goes on. Not a single candidate could compete with this woman’s breadth of knowledge and determination. And in a morality competition, not a single candidate could hold a candle.

Sure, Williamson’s past is non-linear and unconventional. BFD. She’s not a lemming and is constantly seeking answers and questioning the paradigm. We need more of that in any politician if we are to grow and evolve.

Does it worry me that she has no “political experience?” Not one iota. Look at the kids from Parkland or Moms Demand Action and what they’ve done to mobilize people. Look at the organizers of the Women’s March and the #MeToo movements. Look at all the women who ran in 2018 and got elected. Did AOC have any political experience? Nope. And yet in 1 year, she’s managed to mobilize and inspire hundreds of thousands of young people to fight climate change and support the Green New Deal.

Marianne Williamson will do the same because she is smart enough to know what she doesn’t know. Take all her celebrity fans with a grain of salt. Oprah isn’t going to be in her cabinet. Marianne as President will surround herself with the top scientists, engineers and researchers, financial analysts, diplomats, generals and peacemakers, teachers and doctors to make informed decisions on policies — unlike the current administration.

The other 2020 candidates are like junior varsity volleyball players on stage at this point. This is a bigger 21st century conversation that they just have no experience with. They can talk to me about gun control and immigration policy and the nuances of healthcare policies, etc. until they are blue in the face, but no matter the issue it comes down to how are we treating each other — that and the greed that drives horrible policy making. If you take away the money in politics, we will all benefit and if we all benefit, “love will win.”

Marianne Williamson deserves to take center stage because the only thing to defeat the evil phenomenon currently in the White House is another phenomenon of greater strength and that is one of love. Our country is falling apart, we are at war with each other, we have lost all of our American values and we’re in a ship listing on the high seas of hate. We need someone to turn the ship around. Williamson has done this for decades.

Marianne Williamson for President in 2020 — give just $1 so she makes it onto the stage for the 3rd debate. She deserves to be heard — just sayin’.

To any trolls who may respond: I love you. It will all be ok.