What is it About Marianne Williamson? 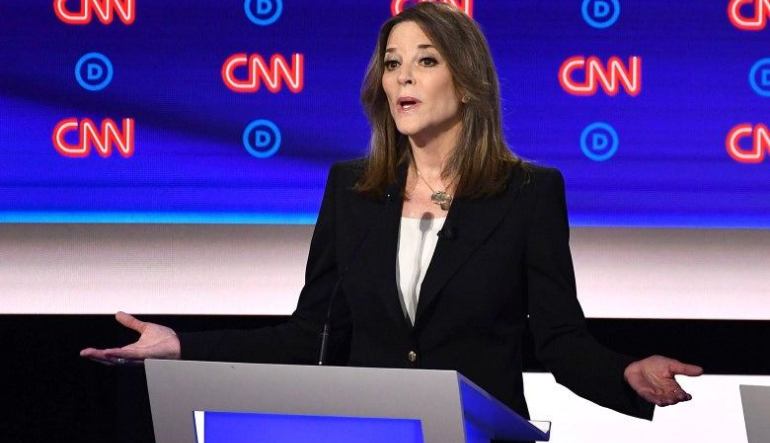 On the July 30th Democratic debate stage, Marianne Williamson caused a lot of commotion. She talked about dark psychic forces, Flint, Michigan, and reparations for African-Americans. She ended up the most searched candidate of the night on Google. There’s no doubt that she stole the limelight in her half of the July debates. She certainly has a unique quality to her, but few in the political world seem to have puzzled out why. Let’s put the pieces together.

First, who is Marianne Williamson?

Williamson, while not exceedingly famous, has a lengthy history of being in the public eye. She began lecturing on Helen Schuman’s work “A Course in Miracles” in 1983. She wrote her first book “A Return to Love” in 1992 (which garnered her an appearance on Oprah). Williamson has written twelve more books since. She even ran for California’s 33rd congressional seat in 2014 as an independent, finishing with 13.2% of the vote in the primary.

Williamson also has a long record of social activism, on topics ranging from HIV/AIDS to poverty solutions and relief.

What may begin to convey Williamson’s appeal better than any political analysis is a response she gave about the failure of her 2014 congressional campaign:

“My losing the congressional seat is small; what’s big is the larger conversation… you impact the ethers, and that energy goes somewhere.”‍

While a reply like this may be easy to castigate as a hippy-like statement, it’s actually quite compelling when taken in good faith. Williamson is telling us that the actions we perform matter whether we can trace their results or not, and that’s an absolutely novel idea in the political world. It is, however, the reality we all know in the real world.

This is precisely what Marianne is speaking to in her, admittedly, slightly goofy spiritual language. The real world. Unlike everyone else in the 2020 democratic primaries, she is not attempting to speak in political terms for her own political ends. She’s attempting to speak to each and every whole individual watching her and imploring them to understand the wackiness of the political world.

In her view, the hyper-critical standards we hold politicians to are unnatural, the way we write our laws is blind to the needs of real people, the ruthlessness of our economy requires readdress, and the fervor of rage Trump tends to stir up within his supporters is literally a dark psychological force. As a politically moderate conservative, I can’t say the words she’s speaking don’t have some ring of truth to them. She’s believably coming from a good place: she appears genuine about combating hatred itself.

Marianne’s willingness to speak to political issues in holistic, spiritual terms is exactly her appeal. She made this clear herself: in a post-debate interview with Anderson Cooper, she referred to the American political system as “overly secularized.” While much of her political policy is hard left, her rhetoric is far off the Democratic reservation, to be sure.

This is what makes Marianne Williamson, if nothing else, a particularly trail-blazing politician. She’s speaking in a way no other candidate speaks, to address psychological problems so few are willing to confront forthrightly. Her political outlook, if popularized, has the power to affect a cosmic shift in the American social dialogue. Williamson is a psychoanalytical politician, the likes of which the American republic may have never seen before.

She is, put simply, the most interesting and exotic candidate in the 2020 presidential race.