We will not defeat the president with a political argument 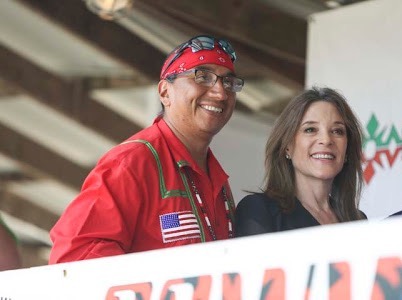 Like the space between Goliath’s eyes, it is the one area where he has no defense. He cannot defend himself morally or ethically because he doesn’t recognize morality and he doesn’t recognize ethics. He cannot fight what he cannot see. It has been the lack of ethics and public morality in our politics that has left us vulnerable to such a one as he, and it will be the retrieval of ethics and morality that will repair the damage he has done and cast the meanness of his politics from our midst. But a moral argument cannot be made by someone who doesn’t understand moral arguments any more deeply than to recognize that the president’s politics are immoral.

It is the articulation of a moral politics - both philosophically and in terms of policy - that form the crux of my campaign, my qualifications, and what I offer the country as a candidate for president. ‬From correcting an unjust economic system, to repairing our broken democracy, to rescuing millions of traumatized children, to reconciling with past wrongs, to reclaiming America’s moral leadership, it will be the alignment of our policies with a high moral vision - not just economic convenience to a financial elite - that lifts this country above its current challenges. Nothing less will do.

The hope for America lies in the embrace of a politics that does not flow like bile from the power of an amoral economic system, but from the power of deep humanitarian principles at the core of our democracy. This speaks not just to changes in Washington but to changes in our hearts as well. These are spiritually revolutionary times. Rehearsal is over. The time for change is now.