We may never see Marianne Williamson on a debate stage again. That’s a pity. 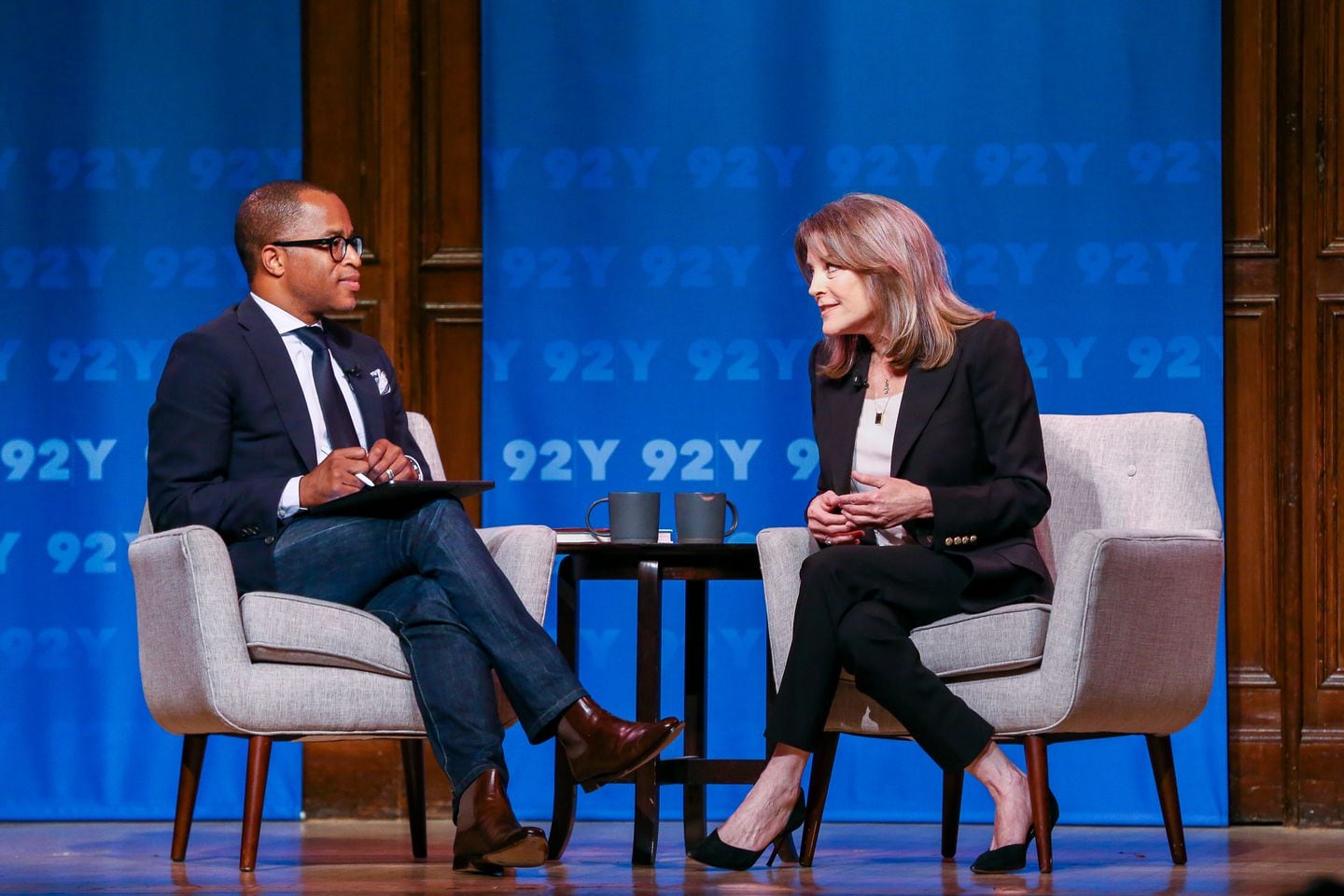 During the Democratic presidential debate last month, my colleague Gene Park sent out a totally tongue-in-cheek tweet that read, “Marianne Williamson’s absence is felt.” To which I replied kind of seriously, “Is it, though?” The author, activist and presidential candidate won’t be on the stage Tuesday night, either. And, now, I’m kind of bummed about it.

Since the last debate, two things have happened. First, I interviewed Williamson at the 92nd Street Y in New York the week following that September debate. Second, I finished her book, “A Politics of Love: A Handbook for a New American Revolution.” Should she be on that debate stage? No. Should she be part of the national debate? Absolutely. Forget the caricature of Williamson as a crystals-carrying mystic who extols love as the answer to everything. Listen to what she is actually saying about what ails our country.

“I’m having a conversation with people where I’m not trying to figure out what they want to hear. … We have a politics of people pleasing,” Williamson told me before an audience on Sept. 18. “To me, a leader shouldn’t be deciding what you want to hear. A leader should be saying what, to the best of our ability, we feel needs to be said. And I’m having the same conversation with the rich and with the poor, black, white, Latino, Jewish, Muslim, Christian, gay, straight. I’m having a deeper conversation about the state of our country and the state of our democracy.”

Williamson’s entire book “A Politics of Love” is a compelling deeper dive into that deeper conversation. “The tyranny in America today is not really so different from the tyrannies of any other time or place; it’s just branded better,” she writes. “A democratic revolution can’t be fought once, as in 1776, and then simply considered handled. Democracy is never safe from those who find it inconvenient to their purposes. Every generation has to rise up in its own time, face the challenges of its own day, and continue the revolution in its own way.”

Arguing that “We’ve lost the plot of our democracy,” Williamson writes, “One of the most powerful things an American citizen can do today is read up on American history. … if someone didn’t learn about the Bill of Rights when they were a child, how would they know to be appalled as an adult when they see it under assault?” asks Williamson in one of many observations that left me thinking, “She makes an excellent point.”

Where Williamson has gained a lot of admirers is in her assertion that plans alone are not going to beat President Trump. “He didn’t win by saying he had a plan. He won by simply saying ‘make America great again.’ We’ve got to get deeper than just these superficial fixes, as important as they are,” she said at the June 27 debate. Williamson expanded on this and the power of Trump during our sit-down last month.

The president has ushered in an era of political theater. We will not be going back. … I have deep concerns about whether or not a conventional political argument will be able to defeat him very easily. Conventional politics is like a very good actor somewhere down like at the New York Public Theater, behind a podium, reading a very fine play. [Trump] is like surround sound “Star Wars” on huge screens all around. So we have to rise to the level of his frequency. It’s almost like homeopathy. Right? That’s me, baby! …

Now, he is a phenomenon, he is not just a politician. He is a phenomenon. We need to counter that with a phenomenon of our own. The phenomenon we can counter him with is not any individual, but it is the power, the energy, the motivation, and the spirit, and the inspiration that comes from having a real, radically honest conversation about who we are and what we are doing as a country. …

When Williamson talks about the power of love, think of Rev. Martin Luther King Jr., who used love as the foundation for the nonviolence stance of the Civil Rights movement. It means harnessing the power of love to bring about changes in hearts and policy. It means resisting judging and shaming folks who voted for Trump.

The day of our 92nd Street Y conversation, Williamson had dropped from 1 percent support in the Wall Street Journal-NBC News poll to zero percent. As of this writing, the RealClearPolitics poll average puts her support at 0.6 percent. So, we might never see Williamson on a debate stage again. That’s a pity. She put that platform to great use while she had it and forced many of us to think of our politics in a more expansive way. With things getting crazier in Washington, we could stand to hear more from Marianne Williamson, not less. Would that there was a way to make that happen without her having to run for president.