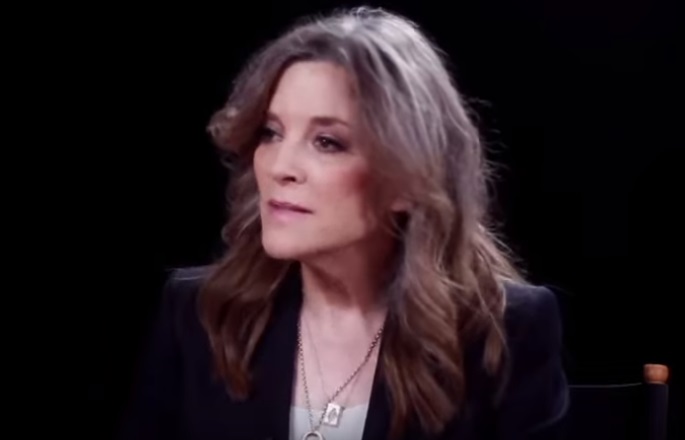 While many of my allies lamented the explosion of social media memes mocking Marianne Williamson after the Miami debate, the truth is that she received exactly what will propel her campaign to the next level: attention.

Despite only speaking for five minutes, she got a result that far exceeded anyone’s expectations: the top ranking of Google search traffic.

She became a “star” according to multiple commentators. Which means that the nearly 80% of American citizens who had never heard of her are far more likely to talk about her, Google her, or watch her videos.

If Marianne lacked real substance and depth, this wouldn’t matter. It would just be a momentary sideshow.

But the truth is that when people listen to Marianne for an extended period of time, they come away impressed, moved, and often blown away.

She is an electric speaker with a deep understanding of policy, history, and human consciousness. She bravely speaks the truths that need to be spoken and can offer tough reflections that take us out of comforting delusions.

She is one of the smartest people I know, and has a lifetime of experience that combines political insight, spiritual wisdom, and a capacity to heal the hearts of the masses.

So I don’t fret at the propagation of memes about her Ministry of Magic or healing America with crystals. Bring them on!

They are ultimately the discriminatory reactions of people who don’t quite grok who she is — or the power she’ll be bringing to the race in the months ahead.

In fact, this ridicule is probably the necessary gateway through which her campaign will pass before people begin to see that hers is a real candidacy.

Marianne speaks from a level of awareness and authenticity that goes beyond carefully parsed political speak. She stirs the soul in listeners by speaking to an awareness beyond surface platitudes. And that initially makes people just a bit uncomfortable — and more likely to try to dispel that discomfort by mocking her.

Some decades ago, it was considered socially acceptable to mock gay people. Or black people. Or the developmentally disabled. Thankfully, such ridicule is no longer tolerated by the vast majority of Americans.

But what’s still socially acceptable is what we might call “worldview discrimination” — mocking someone because they hold beliefs that we don’t understand or see as weird.

Because Marianne is now becoming a visible representative for a worldview that is increasingly common — typically labeled “new age” but actually an amalgam of wisdom teachings from around the world that goes beyond traditional religious frameworks and offers a more holistic view — she’s going to be subject to considerable ridicule in the months ahead.

She’ll need to keep weathering the witch references and the crystal spoofs and the drug parodies and the other ways that people subconsciously try to subdue a spiritually empowered woman or marginalize a worldview they don’t fully understand.

Someday, we’ll look back and shake our heads that otherwise respectable journalists could label someone “wacky,” “loony” or “from another planet” simply because their beliefs fall outside of narrow, conventional bandwidths.

Seasoned reporters toss objectivity to the wind and throw in all sorts of pejorative adjectives as if they’re “reporting” on facts when in actuality, they’re simply attacking what makes her different out of their own fear of leaving the herd.

For those of us who hold similar beliefs as Marianne does, as I do, and as many of you likely do, we often developed our worldview out of life-changing spiritual experiences that convinced us of the inadequacy of the materialist scientific paradigm or traditional religions we grew up with. It’s not from a lack of clear thinking. I was a Stanford-trained neuroscience researcher who eventually saw through the limitations in our current scientific materialism — and I’m positive that my current worldview is a real evolution over what I was schooled in.

Witnessing Marianne be parodied for holding these beliefs might lead to some pain as we remember family, friends, or community members who couldn’t understand us as we began to explore yoga, meditation, and things like energy work and intuition. There can be a personal cost to leaving the herd.

So really, all the comedy and mocking is fine. Perfect even. They can ridicule her, call her the fringe candidate. Question whether she should be in the debates. Or the race.

They can try to stand as the arbiter of what democracy SHOULD look like, with respectable, normal, conventional candidates. They can be outraged that she is even on the stage.

And it won’t matter.

Democracy is actually a natural selection process for finding who we want to lead us forward. And that decision is made in the hearts of every voting citizen, not by pundits.

What will come as a surprise to the pundit class is just how many people resonate with Marianne’s worldview and find real value in the words she speaks, which are rooted in time-honored truths about the human spirit and how we design our society in a moral way.

Every single parody and every single tweet will increase America’s curiosity to learn more about this candidate who is breaking out of the boxes and daring to overturn conventional truths.

What I guarantee will happen is that the more people listen to her, the more they will realize that she has some uniquely valuable insights into what ails our country and how to fix it.

With perhaps a touch of embarrassment, they will quietly become secret fans. They will watch her videos and start showing up to events.

They might take a little while before they admit to friends their affection for the “Oprah guru” candidate who’s received so many dismissive headlines.

But I’m confident they’ll grow to like her, and then eventually love her, as millions already have.

Marianne is a world-class speaker of the truth that needs to be spoken. It is liberating, empowering, and healing to hear her speak.

In the months ahead, she will be speaking the conscience of our country and rousing the soul of our nation. Simply put, her candidacy is a call to rise to another level of courageous truth-telling. She will remind us of who we truly are — and of the moral imperative to do far better than we have these last years.

America needs a political rebirth. And Marianne will deliver the goods.

I encourage you to spend more time by watching her CNN Town Hall or perusing her campaign site at www.marianne2020.com.