The US should listen to presidential candidate Marianne Williamson 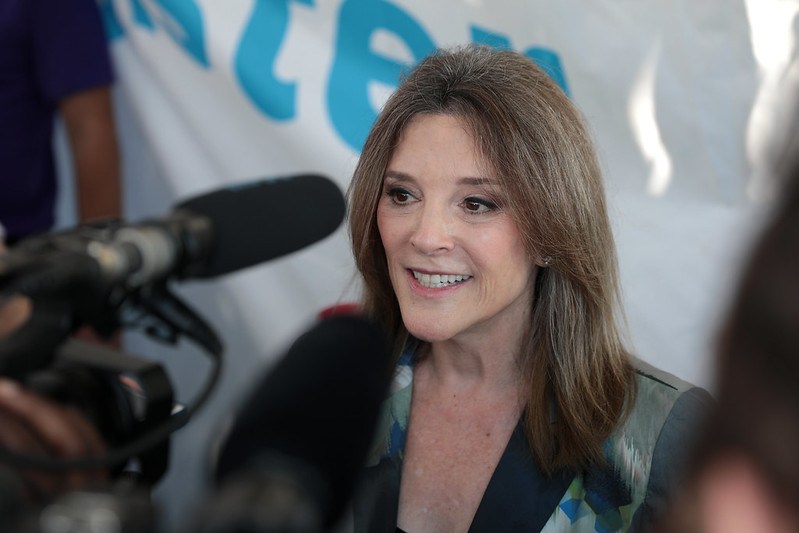 If we are determined to lessen the violence on our planet, are we then not kicking the can down the road by resorting to violent means?

By the same token that a fish does not have the means to climb a tree, an administration that is spending $989 billion in the fiscal year 2020 on the military-industrial complex versus $19.2 billion on international development and humanitarian assistance is not poised to make our planet less violent.

Since 9/11, U.S. taxpayers have contributed almost $6 trillion to the financing of wars, only serving the financial well-being of the military-industrial complex.

Running for the 2020 U.S. presidential elections, candidate Marianne Williamson is eager to address this disproportional spending on national security. In this context, one of her ambitious political objectives is to bring about a policy shift that remodels the U.S. from a war economy into a peace economy.

Concretely, establishing a more equitable relationship between the Defence and State Department would be translated into expanding the investments in peacebuilding approaches to international conflicts. Those avenues to peace may encompass mediation, diplomacy, conflict prevention, development aid, post-conflict transitional justice, humanitarian aid, and support for democratic processes.

The Cost of Violence

Violence is a key driver of perpetuating intergenerational suffering and trauma. Arguably, military solutions to international conflicts can therefore only go so far in fostering a culture of safety.

In 2017, the financial impact of violence on the global economy amounted to $15 trillion. However, investing in conflict prevention in a systemized way logically produces, by its very nature, a cutback in such costs.

It becomes clear then that national security begs for a comprehensive redefinition. Pursuing lasting peace cannot be reduced to symptomatically suppressing violence. On the contrary, harvesting sustainable peace calls for its systemized and active cultivation throughout both governmental structure and society.

A U.S. Department of Peace

For this reason, under a Williamson Administration, a U.S. Department of Peace would be created together with a U.S. Peace Academy. The latter institution would provide a four-year track in peace education. It also proposes that its graduates serve for five years in missions related to domestic or international nonviolent conflict resolution. Further, the Secretary of Peace intends to act as a member of the National Security Council, and coordinate with all Cabinet agencies.

Initially, the funding for the Department of Peace would come from reallocating existing budgets in a more coordinated fashion. Such budgetary reshuffle unambiguously resembles a sustainable win-win scenario. That is, the subsequently saved costs freed up by investing in programs of conflict prevention can be put to good use in other policy areas, such as clean energy, children’s education and the economic empowerment of women, while at the same time safeguarding America’s need for security.

Once the Department is up and running, it would generate savings by virtue of prioritizing conflict prevention as a key aspect of national and international security. In other words, a Williamson administration strategically puts the cart back behind the horse by upping the investments in conflict prevention, which proves to be more cost-effective than war intervention operations.

To tackle several societal ailments, the Department of Peace’s envisaged main undertakings are plentiful. First, it aspires to encourage justice and democratic principles to expand human rights. Second, it plans to reinforce nonmilitary means of peacebuilding, such as conflict prevention and mediation. Third, the Department aims to invest in restorative justice programs. It also proposes to proactively deal with white supremacy, and establish new structures of nonviolent dispute resolution. Finally, it intends to address gun violence.

The Department would thus be involved in an array of domestic and international specific tasks, in collaboration with local and state governments.

Domestically, key duties would focus on a wide array of pressing communal issues. One duty foresees teaching violence prevention to school children. Another contemplates reforming the criminal justice system with a greater emphasis on restorative practices. Yet another task aspires to change the police culture as well as their relationship with the broader community. Other duties have the intention to reduce gun violence, as well as tackle drug and alcohol abuse.

Internationally, the Department aims to take up several core responsibilities. First, it would seek to lend peacebuilding, humanitarian and community-building support where requested. Next, it plans to assist the military with complementary approaches to peacebuilding. Finally, it means to establish a U.S. Peace Academy.

What Does Marianne Say?

The crux of Marianne Williamson’s policy of waging peace is best captured by her own words: “The hope for America lies in the embrace of a politics that does not flow like bile from the power of an amoral economic system, but from the power of deep humanitarian principles at the core of our democracy. This speaks not just to changes in Washington but to changes in our hearts as well. These are spiritually revolutionary times. Rehearsal is over.”