The Strange Appeal of Marianne Williamson 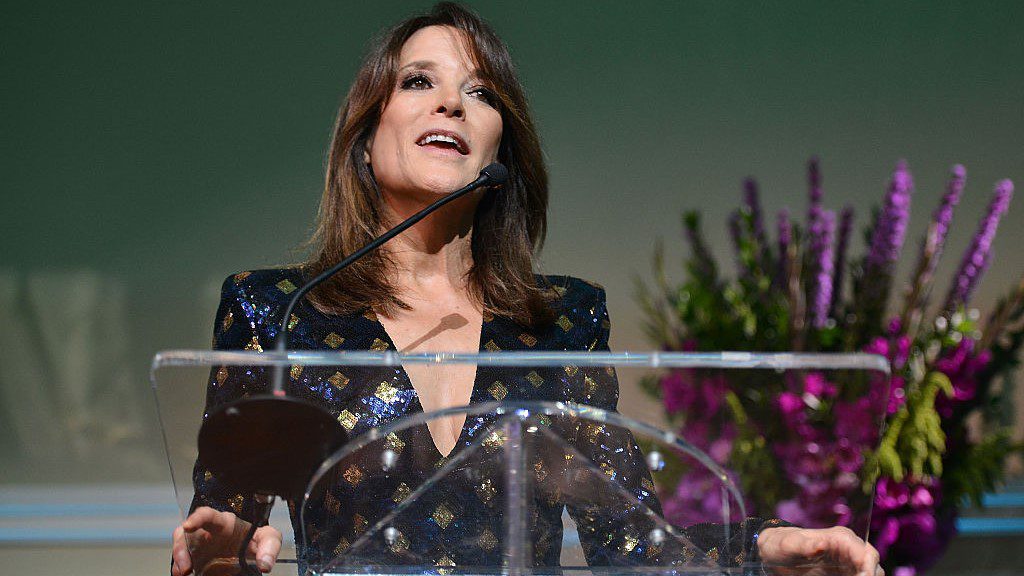 What is the secret of Marianne Williamson’s strange appeal? For one thing, the Democratic candidate for president is a skilled speaker who absolutely radiates confidence. Secondly, unlike most of the “wonks” competing with her, she actually has something interesting to say.

Some have compared Williamson, unfavorably, with Donald Trump. Like Trump, Williamson is an outsider who understands that politics is about bigger things than what can be reduced to policy bromides. Also like Trump, some find Williamson to be reactionary, largely on account of her “anti-science” views. Williamson has taken flak for calling clinical depression a “scam” and claiming that antidepressants are overprescribed for people dealing with “normal human despair.”
‍
Williamson’s comments are anathema to liberals who are incapable of thinking beyond the dimensions of “muh science,” but she is absolutely right. Williamson, quite reasonably, has suggested that the same Big Pharma companies that leftists rail against have also hoodwinked the public into thinking that spiritual depression is somehow abnormal. It isn’t.

Williamson’s liberal critics find her thoughts on mental illness to be offensive, even dangerous. But what if they just don’t want to go deeper? Perhaps they are afraid of the big questions that Williamson, perhaps unintentionally, is provoking.

To admit that America is broken spiritually invites reflection on the cultural revolution of the past half-century. Has America really progressed, or have things gotten worse?
‍
Why are there so many mass shootings these days? Why are young Americans killing themselves at record high rates? Why are they having children at record low rates? Why are diagnoses of depression and anxiety so high, despite a marked jump in antidepressant use? Why is life expectancy in the wealthiest nation on earth going down, rather than up?

Like Trump, Williamson has put her finger on a deep spiritual anguish.

Her concern about “moral dysfunction,” her assertion that pills are being used to “numb” despair, has an oddly reactionary flair. Perhaps this is why some progressives are troubled by her. They aren’t concerned by her “dangerous, anti-science” views, but by her contention that humans have spiritual needs that are being ignored by our liberal politics.

Williamson talks about politics with a rare, refreshing and—for a liberal—an unequaled moral vision. She understands what the wonks don’t: politics is fundamentally a psychological and moral science, and its goal—happiness—can’t be achieved without a clear sight of this reality. It seems no accident that American life, under the wonks’ leadership, has become distinctly paranoid, anxious, lonely, depressed, and unstable.

In a country with substantive politics, a conversation about America’s fractious psychological state would be front and center. Instead, it gets buried under superficial policy chatter. The wonks can’t see the forest for the trees. Their politics has no solution for problems of the spirit because it lacks the depth to see these problems for what they are.

Of Markets and Morals

The essence of “wonkiness” could not be more opposed to happiness. Wonkiness is neoliberal materialism, the view that all political problems can be solved with just the right “plan” to allocate resources in just the right way. While materialism has long dominated the Right through worship of the market and its provisioning power, it is more fundamentally a feature of progressive liberalism—which makes Williamson’s critique rather strange for somebody aligned with the Left.

There is some overlap between Williamson’s thinking and the Trumpists of the Tucker Carlson generation, who have begun to reject the notion that markets are untouchable and operate on a morally neutral plane. Like Tucker Carlson, Williamson sees markets as having a moral purpose. Also like Carlson, Williamson understands what politics is really about: soulcraft, the art of building a happy society. Moral leadership is more important than policy expertise. By the same token, the economy, rather than segmented from the rest of political life, is part and parcel of an integrated ethical whole.

To libertarian wonks on the Right, the economy has no moral dimension; markets operate independently of human goods, according to their own inviolable laws. Following this callous prescription, our leaders have spoiled the material basis for family life by treating multinational corporations like gods to be worshiped, rather than making markets work for the people.

But Wiliamson’s critique of “wonkiness” overlaps with the Right in more ways than her critique of amoral markets. Her thinking reflects a central preoccupation of the populist Right: the country, awash in a spiritless materialism, has lost its sense for higher things, truths, and goods. Traditionalists reject materialism out of hand, which partly explains the Right’s ongoing evolution beyond Reaganism into the populism of Carlson. Materialism has long dominated the Right through neoliberalism, but materialism is a fundamental part of left-liberalism and the world it has made.

Wonks on the Left, with plenty of help from libertarian wonks on the Right, have sapped American life of its sense of the sacred, of belonging to a human community and a natural order larger than the self. These worshipers of “science” and “the self” have, from the top-down, impressed upon the American soul an isolating, vapid culture of expressive individualism that tries to fulfill spiritual cravings with vulgar materialism.

To the wonks, any policy must be dismissed that can’t be reduced to capsule size, backed by the credentialed expertise of the right professional people working for “respectable” institutions. There is never any consideration for spiritual needs which cannot be supplied by government or sized down to a policy plan. If lots of people are unhappy, anxious, depressed and killing themselves and each other, there cannot be something wrong with society’s soul; the problem, like the solution, must be strictly material.

Liberals, working from this basis, typically think of spirituality as something that ought to be relegated to the personal sphere; Williamson, like the traditionalist Right, believes an appropriate and critical role for it exists at the political level. While her competitors fight over how to fund health care, Williamson wants “radical truth telling, not just to talk about healthcare but talk about why we’re so sick all the time.” She wants a politics that goes “much deeper and speaks to the heart.”

Williamson has pointed out the deep spiritual impoverishment of our liberal politics and culture. Even the most radical Democrats are “wonks” who think that supplying the right resources to the right people will solve all political problems. Senators Bernie Sanders (D-Vt.) and Elizabeth Warren (D-Mass.) rail against the exploitation of drug companies, but neither goes as far as Williamson does in suggesting that Big Pharma is suppressing, rather than healing, human despair. For the “wonks,” it’s all about trusting the “experts” and getting people the drugs they are said to need. They never ask why so many people appear to need these drugs.

The materialism of the Left fundamentally sees the human as a being in want of bread. The soul either does not exist, or it has needs which cannot be recognized on the level of politics. There is no highest Good to life; morality is neither here nor there, something to be kept strictly separate from the most important questions. The source of all knowledge is science, but little can be known with certainty about what is really true and good. By the same token, family, nation and faith are arbitrary, even harmful and retrograde, and must be abolished.

The wisdom of the ages is mere superstition to be discarded, its prudence and prohibitions scorned. The individual is the center of a political community that has no particular reason for existing, other than to provide the means for limitlessly increasing choice. Careerism, “busyness,” and consumption are the highest goods; laborers and lovers alike are fungible in fluid, selfish, and dehumanizing marketplaces.

Despair is a problem for science to solve, with pills and other sedatives. The idea that people even have souls, and that bad habits and choices can hurt their souls, fails to register under the rubric of John Stuart Mill’s harm principle. There is no particular reason why anyone should do or not do anything, so long as they don’t hurt each other.

This materialism has not made society happier. The revolutionaries of the past thought America could just throw out marriage, family, and religion and have everything be the same, only better. But this has not been borne out. Broken families and communities are the norm rather than the exception. The peace and tranquility of home life are a shambles, spoiled equally by divorce and the “two income trap.”

Happiness has material and spiritual conditions, but rule by policy wonkery has destroyed both, and then supplied opiates—both literal and figurative—to make life tolerable in the aftermath. Ours is a time of endless choice: a feast of entertainment is available to almost anyone, while weed increasingly has the stigma of gummy bears. Travel is cheaper and more accessible than ever.

At the same time, America has never been more sad, angry, and deranged.

These are not the vital signs of a thriving culture. They are the symptoms of a nation that has lost its confidence, its purpose, and its soul. Williamson’s assessment raises the question of whether this despair is not the product of “progress.” All of this makes Williamson’s mystic, lefty pseudo-communitarianism strangely profound and contradictory.

Williamson’s New Age-ism is a product of the very Boomer revolution that produced the spiritual crisis she names. Her critics have portrayed the individualist elements of her New Age thinking as selfish and neoliberal. But if Williamson is a Reaganite, then she is doing a poor job of showing it on the debate stage. No neoliberal would describe profit as a “false god.” Her integrated political perspective is more Carlson.

It’s a feature of our ossified liberal politics that it takes outsiders with no political experience to say the things that really matter. Williamson may be no friend of the Right, but she has a message that the country should heed. America is broken, and it needs healing that no liberal “wonkiness” can provide