The Meaning of Marianne Williamson 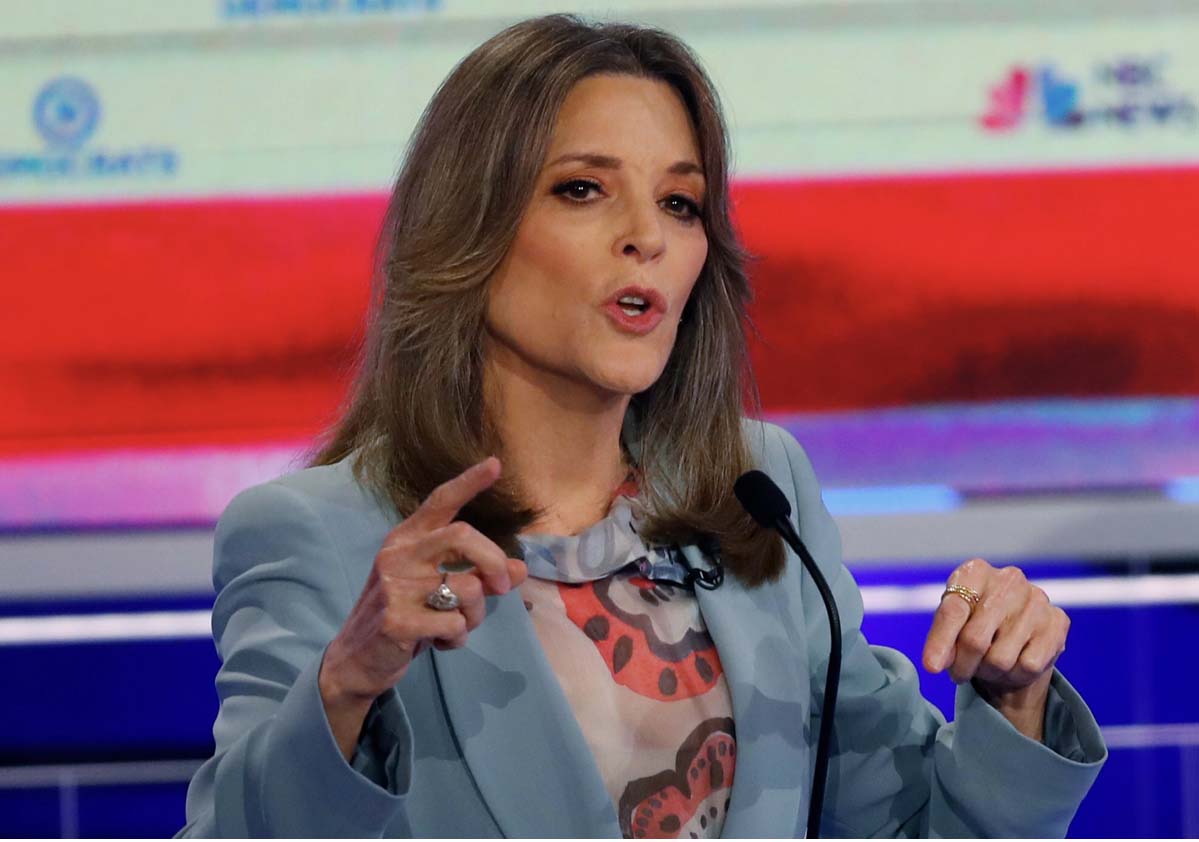 One of the pleasures of the Democratic primary season so far has been watching some of my colleagues in the press have their first exposure to Marianne Williamson, a figure who has occupied an important role in the American religious landscape since my own mysticism-shadowed youth, without always getting the credit for cultural influence that she deserves.

That influence, well-described by Sam Kestenbaum in last Friday’s Times, centers on her role as a popularizer for “A Course in Miracles,” a book that has long been ubiquitous in the borderlands between charismatic Christianity and New Age spirituality. Since her first encounter with its message, Williamson has played the Apostle Paul for the book’s author, Helen Shucman, carrying the Course’s Mary Baker Eddy-esque promise of healing and harmony through a long career as a celebrity whisperer, Oprah-endorsed personality, author and spiritual guru — a career that has now finally led her into politics, as a kind of New Age answer to Pat Robertson or Al Sharpton’s ministerial campaigns.

A recurring question in American politics since the rise of the Moral Majority and the Christian Coalition has been “where is the religious left?” One possible version has been hiding in plain sight since the 1970s, in the form of Williamson’s style of mysticism, the revivalism of the Oprah circuit, the soul craft of the wellness movement, the pantheistic-gnostic-occultish territory at the edges of American Christianity’s fraying map. We don’t necessarily see it as a “left” only because it has acted indirectly on politics, reshaping liberalism and the wider culture from within and below, rather than acting through mass movements and political campaigns.

In which case the Williamson candidacy is an interesting milestone, a moment when an important cultural reality enters into politics explicitly, inspiring initial bafflement and mockery (in this case, via journalists digging up Williamson’s most Moonbeam-y old tweets) but also exposing something important about America that normal, official media coverage ignores.

Certainly in the eternal pundit’s quest to figure out what a “Donald Trump of the left” would look like, a figure like Williamson is an interesting contender. If Trumpism spoke to an underground, often-conspiratorial populism unacknowledged by the official G.O.P., Williamson speaks to a low-on-data, long-on-feelings spirit that simmers just below the We Are on the Side of Science and Reason surface of the contemporary liberal project. As Alex Pareene wrotefor The New Republic after her weird but weirdly compelling debate performance:

If the superficial version of “Democratic Trump” resembles him aesthetically, the proper version would be closer to his opposite: Not just female but powerfully and unabashedly feminine, aiming her message not at the raging car dealer dad but the anxious Wellness Mom. …

The post-debate polling, however, shows no Williamson surge — and my sense is that the path to a New Age answer to Trump would require a candidate who crosses racial boundaries more easily than Williamson (meaning, basically, Oprah), and a Democratic rank-and-file more alienated from their party leaders than today’s Democratic voters seem to be. Trump arose in the aftermath of both a failed establishment-Republican presidency and then the failed Tea Party insurgency; by comparison the Democratic Party still regards its last president fondly and regards itself as the country’s natural governing coalition, requiring no gambles on the power of Pure Love.

But Trump had his forerunners (from Pat Buchanan onward), and if we aren’t likely to get President Marianne in 2020, in the long run her fusion of spiritual celebrity and political activism might be imitated and amplified, even as her distance from the technocratic norm points to a potential schism in the mind of liberalism.

The liberal intelligentsia has long prided itself on taking the side of reason and science against first religious conservatism and now right-wing populism — defending a particular version of the Enlightenment against televangelists and superstition and Fake News. But because man does not live by Neil deGrasse Tyson memes alone, and because the mix of hard scientific materialism and well-meaning liberal humanitarianism has always been somewhat incoherent, the cult of reason necessarily shares space in liberal circles — especially liberal circles outside the innermost ring of the meritocracy — with other cults, other commitments, of the sort associated with “A Course in Miracles.”

The spirit of deGrasse Tyson and the spirit of  Williamson can certainly coexist, especially when politics supplies a common enemy as vivid as Donald Trump. But they can also fall into war with one another, over differences more significant than the debate over Medicare for All.

Such a war is not exactly upon us, but there are interesting skirmishes happening, interesting skeptic-on-believer battles. For instance, the recent measles outbreaks have focused media attention on left-wing vaccine skepticism — something Williamson has dabbled in, unsurprisingly — and the spirituality-soaked cultures in which that skepticism flourishes. One of these cultures is the world of Waldorf education, increasingly popular among a left-leaning base of parents precisely for its anti-technological and frankly mystical approach to childhood — which was given a witheringly skeptical treatment in New York magazine recently, a case of liberal-on-liberal conflict as stark as anything on the Democratic debate stage. (Full disclosure: My daughters attended a Waldorf preschool.) And if their children’s education is often the place where people’s deepest commitments are revealed, you might usefully describe certain potential intra-liberal conflicts as left-romanticism versus left-technocracy, or “Waldorf versus STEM.”

It’s also been interesting to watch some liberal and centrist critics of the Great Awokening, the post-Obama leftward turn on issues of race and gender and identity, warn against its allegedly religious character, its supposed rejection of Enlightenment ideals. Certainly within the new progressive world there is a tension between a desire to claim the mantle of science and a yearning to fuse the political and mystical — what Tara Isabella Burton has describedas the “progressive occultism” of astrological charts and anti-Kavanaugh séances and “Trump-era how-to spellbooks that blend folk magic with activist practice.”

It’s not a coincidence, against this background, that some of the refugees from contemporary progressivism who form the so-called Intellectual Dark Web or publish in journals like Quillette have commonalities with the Bush-era new atheists who once bashed right-wingers for their religiosity — or indeed are Bush-era new atheists, in the case of Sam Harris, born again as an I.D.W. eminence and scourge of the progressive left. In this trajectory you can see one potential arc for proudly secular liberals, if the left’s future belongs to woke covens and progressive pantheism …

… but then it’s also not a coincidence that perhaps the most popular of the Intellectual Dark Webbers, Jordan Peterson, talks about Enlightenment values in one breath while offering Jungian wisdom and invoking biblical archetypes in the next. Chase religious ideas out one door and they inevitably come in another — because the human mind naturally rebels against a worldview as incomplete, as manifestly threadbare, as pure materialism.

Of course a pure mysticism needs the corrective of reasoned skepticism as much as a pure materialism needs the corrective of experience, philosophy and common sense. Thus any battle, present or future, between a secular left and a spiritual left will never end in victory for one side or the other; only a synthesis of faith and reason can settle things between the two.

But pending that synthesis, Democrats as well as curious onlookers should be glad to have  Williamson onstage for at least one more round of weirdness. Even if most mystically inclined liberals aren’t going to vote for her, she speaks for a larger constituency than many of her rivals, and her warnings of spiritual crisis are at least as relevant to an America beset by addiction, suicide and atomization as any of Elizabeth Warren’s white papers.

It would take the entire course in miracles to put Williamson in the White House, but she’s right about one big thing: There’s more to heaven and earth, and even to national politics, than is dreamed of in the liberal technocrat’s philosophy.