The Daily 202: Marianne Williamson wants to remember the ladies in Afghanistan 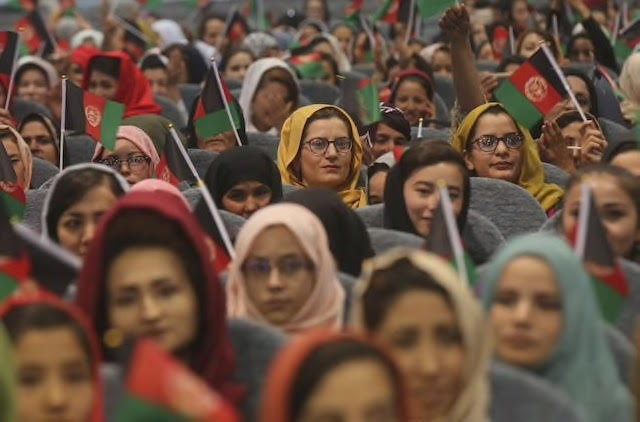 THE BIG IDEA: In 1776, Abigail Adams wrote a letter to her husband as the colonists prepared to declare independence. “And, by the way, in the new code of laws which I suppose it will be necessary for you to make, I desire you would remember the ladies and be more generous and favorable to them than your ancestors,” the future first lady pleaded to John Adams. “Do not put such unlimited power into the hands of the husbands. Remember, all men would be tyrants if they could.”

Imagine how much greater a country we might be today if the Founding Fathers had heeded her call to “remember the ladies” from the get-go. Their failure to do so was one of America’s original sins. Instead, women would not be guaranteed the right to vote for another 143 years. Things have improved significantly, but the pay gap and sexual assault remain endemic.

Marianne Williamson is alarmed that the mistakes made at the dawn of our republic will be repeated in Afghanistan as the United States negotiates a troop drawdown with the Taliban. While her fellow Democratic presidential candidates tout their desire to end America’s longest war as soon as possible, the author and self-help guru has emphasized more than any of her rivals the need to use the leverage that comes with a large troop presence to extract enforceable security guarantees for women and girls. She says a gentleman’s agreement is not good enough.

The 67-year-old said during an interview yesterday afternoon that she’s been concerned about the subjugation of Afghan women since long before the U.S. invasion in the wake of 9/11. “This has been a feminist issue since before 2001,” Williamson told me as she drove from Sioux City, Iowa, to Des Moines. “One positive thing that’s come from us being there has been the lessening of brutality towards women and the rights of women that came into full expression as a result of liberation.”

Williamson expresses visceral concern that conditions for women will revert to the way they were during the last time the Taliban dominated if President Trump agrees to a bad deal. Women were not allowed to attend school before. Today, about 3.5 million are enrolled in primary and secondary schools. Women were routinely flogged for not wearing full-body burqas or if they went outside without a male chaperone. Today, women can vote. In fact, they constitute a larger share of the parliament in Afghanistan than of the Senate in the United States.

Williamson said she’s been closely tracking coverage of the ongoing negotiations, and she finds it “very disturbing” that safeguarding the gains made by women over the past 18 years has not been a top priority. “I know some people seem to think that this new generation of Taliban leadership is somewhat more lenient towards women, but that to me is not enough,” she explained. “I want to see that subject front and center as part of America's official negotiating posture.”

She would not have excluded the Afghanistan government from the bilateral U.S. talks with the Taliban.Williamson said she would consult closely with Afghanistan’s ambassador to the United States, who is a woman, and speak directly with other female leaders in Kabul’s civil society to get their input on what a workable deal might look like. “If we're going to talk about moving forward in a new direction, then we have to start now,” she said. “The rights and the protections of the women of Afghanistan in current negotiations with the Taliban is a perfect example. We must not wait and do these kinds of things later.”

To be sure, Williamson is still a dove at heart. On Monday, for example, she unveiled a detailed plan to create a Department of Peace. But while her odds of winning the nomination certainly remain slim to none, the first-time candidate is devoting a ton of time on the trail to talking about a profoundly important issue that, frankly, seems like an afterthought for the top-tier candidates. It’s always a crowd-pleaser when the various candidates promise to “end the endless wars.” Trump does it at his rallies, as well. But the degree to which Williamson emphasizes that a pullout must be done in a thoughtful manner is striking. For folks who know only the reductionist caricature of her that they’ve seen during the first two debates, it’s also surprising.

Williamson chastises her fellow Democrats for leaning on talking points when it comes to matters of war and peace. “‘Bring them home’ is a slogan. It’s how we bring them home and under what conditions do we bring them home,” she told me. “I wouldn't be running if I thought that everything that needed to be said was already being said about this and so many other things. …

“Large groups of desperate people should be seen as a national security risk,” she continued. “Large groups of desperate people are more vulnerable to ideological capture by genuinely psychotic forces. Until we have a fundamental break with the thinking and the behavioral patterns of the past, all we're doing is removing a symptom that will almost inevitably morph into another one down the road.”

Giving women seats at the table would be a central aim of Williamson’s foreign policy doctrine. “Over and above the fact that we're half the human race, and violence against women is as egregious a human rights violation as could possibly exist on the planet, there is no serious path forward for peace on Earth that does not include much greater attention given to the rights and the protection of women,” she said. “There are four factors which, when present, statistically raise the probability of peace and decrease the probability of conflict. Number one is an expansion of economic opportunities for women. Number two is the reduction of violence against women. Number three is the expansion of educational opportunities for children. And number four is the amelioration of unnecessary human suffering.”

Williamson said that the voters she’s been talking with seem to appreciate her nuanced views vis-a-vis Afghanistan. She said she doesn’t discuss the country because she thinks it will garner support but because she thinks the issue is critically important. “It is my experience that the American people are so much smarter than the conventional political establishment seems to think,” she said. “I don't think the role of leadership is to wait to be told what you should talk about. I think the role of leadership is to say what needs to be said.”