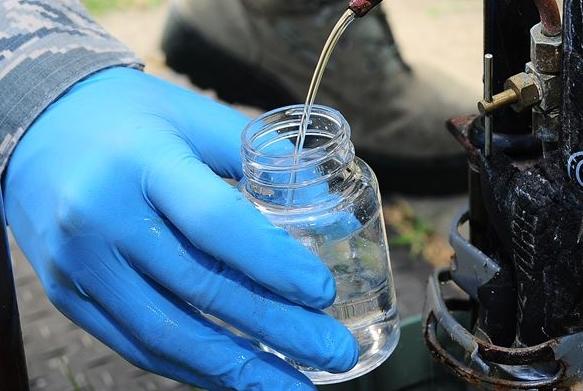 Today while in New Hampshire, I visited one of the many communities across America that have been found to be contaminated by PFAS from an industrial polluter. I listened to the townspeople. I heard their stories. But what I really heard, underneath, was their fear. Fear for the safety of their children, anxiety about their future. And their bewilderment and heartbreak for a system that no longer works to look out for them and their families, but which puts the greed of multinational corporations first and foremost.

PFAS or C8 is part of a family of toxic chemicals which scientists now call “forever chemicals,” because they last in the environment an extended period of time. In addition, they bioaccumulate in the human body, meaning each exposure builds upon the last and continually builds up in the body, causing numerous health symptoms. Just a few of the documented health impacts of this family of persistent, unregulated toxic pollutants are thyroid disease, pancreatic, kidney and testicular cancers and a compromised immune system (ulcerative colitis).  In addition, PFAS bio-persists in the environment. After its intended use as firefighting foam and in everyday household products such as Teflon non-stick pans, stain-resistant carpeting, water resistant clothing (Gore-Tex), stain resistant sprays (ScotchGuard) and food packaging, PFAS wears away into the air, soil and water. It is virtually everywhere, with over 600 documented contamination sites nationwide. And these are just the sites we know about, sites which have been tested. Human test results show PFAS to be in the blood of 98% of Americans.(1) To make matters worse, science has found PFAS to be toxic to human health at extremely low levels of exposure—at parts per trillion.(2)

The PFAS situation is not only a human health crisis and an environmental nightmare but an abdication of duty by the U.S. Government. Rather than protect its people and safeguard its sacred natural treasures and wildlife, it provided a moral atmosphere where American corporations felt it was acceptable to manufacture, sell and distribute poison. When this happens on the streets, we call it drug dealing.  We punish the perpetrators by putting them in jail. Documents from several court cases in West Virginia and the Ohio Valley where PFAS was produced show that these companies knowingly, willfully and maliciously suppressed scientific data showing this family of chemicals was extremely dangerous to human health.(3)

This action by several well-known and formerly respected American companies like 3M and Dupont must be punished to the full extent of the law. They must be held accountable for their misdeeds. Dupont’s annual profits exceed $25 billion every year. The POLLUTER MUST PAY to clean up its mess and to ameliorate the human suffering it has caused and the adverse impact it has caused to human health and to our environment. The US Government and EPA MUST STEP UP and do its job, not cowtow to corporate lobbyists. Due to the dysfunction of the federal government and its failure to protect us, States will have to act first, setting human health centered, safety-first drinking water standards and mandating strong cleanup laws.

The PFAS crisis is a terrible outcome for hundreds of American communities around the country who have been let down by the people who were supposed to protect them and misled by the people who sold them products they unwittingly used in their own homes. This is a horrible example of what has gone wrong in American public policy in the last several years. It is why we need to disrupt the system. We need objective science and persons of integrity making public policy, not corporate shills.

Due to its biopersistent nature, the PFAS in our bodies and environment is with us for a long time to come. We probably don’t even know what the long-term effects will be.

It is imperative that EPA explore the most efficacious methods for treatment and remediation of polluted sites, and the Federal Government must give states and impacted communities the resources they need to be healthy and safe.

The US EPA must regulate all persistent toxic pollutants - not just individually as contaminants, but it must examine the cumulative effect of chemicals being discharged into our air, land and water. For too long we have had environmental policies testing one pollutant at a time, disregarding the impact of all these toxins in our environment together.

It is time to regulate toxins that are currently unregulated, for EPA and the federal government to do their jobs, and for the states to step in. And it’s high time for the people to rise up and take back our government.