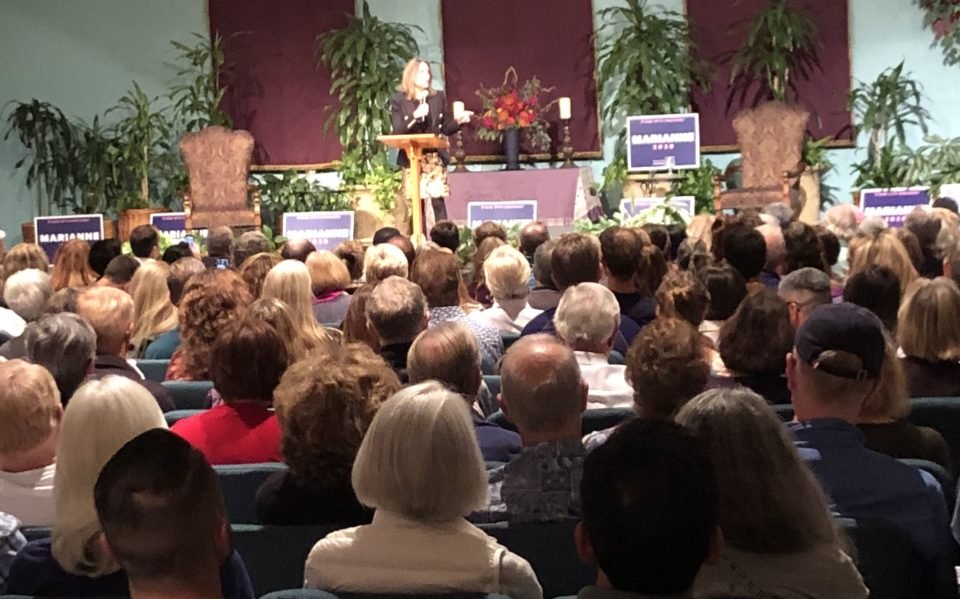 The usually serene Seaside Center for Spiritual Living campus and Event Center was transformed into a standing room only auditorium to welcome presidential candidate Marianne Williamson Tuesday night on her only California Town Hall stop. As part of a whirlwind national campaign trail, Williamson chose a familiar and much-loved stomping ground at Seaside, having spoken here to an appreciative audience many times in the past.

Reverend Christian Sorensen, Spiritual Leader of Seaside had fond memories of his times with Williamson. “I’ve known Marianne since the early ’80s and our Spiritual paths have crossed many times in my days up in Hollywood and the Los Angeles area. Her work in the New Thought movement has been exciting to watch along with her stellar ascent- quick and bright. She has always brought a new way of looking at things boldly and dynamically, and now she is addressing the national issues of today with a Spiritual perspective. Our philosophy is a conduit for higher thought and a loving perspective, and she is bringing this concept of love and peace to a world stage that is currently engaged in anger and division. Since our philosophy here at Seaside is based on love and peace, we are overjoyed that she has chosen Seaside as her event venue. She is surely a gift to humanity at this time.”

Meeting the donation guidelines of the Democratic National Committee but falling short in the poll percentage of the new requirements and thresholds, mostly because of the unprecedented amount of people currently running for president, Williams was absent from the concurrent debate stage in Ohio that was being televised, but she’s far from out of the race. (Her live stream of this evenings event topped a whopping 30K at the time of his writing)

Entering onto the Seaside stage to a resounding standing two-minute ovation from over 700 very enthusiastic supporters waving signs and chanting her name, Williamson’s first words were, “This is so much better than that debate stage”.

Only basking in the palpable love for her in the room for a moment, not skipping a beat, she went right into the statement of the current political climate calling it a “critical moment”,  an “extraordinary moment”, the kind of times that “try men’s souls”.  The deepest question she asked everyone to ask themselves is “how do I most correctly inhabit this time and this space.” Noting that life isn’t just something that happens to us, more that life is who we choose to be in this time and space. Asking us to “align ourselves with the Angels of our higher nature”, quoting Abraham Lincoln at another pivotal time in our nation’s history.

Speaking about kindness, mercy, justice, compassion, and love are not typical topics our population is used to hearing in a political debate. Williamson is certainly bringing a different message to the American people as they choose the direction, they would like our country to take.

Well known for decades in the Spiritual and New Thought communities, Marianne has been on dozens of book tours and lecturing to packed houses around the country, and is the author of 12 best-selling books, her latest The Politics of Love. Her most famous, A Return to Love, remained on the New York Times best-selling list for 39 weeks after Oprah introduced it to her book club.

Reflecting on a recent podcast interview where the interviewer asked why someone who embodies Spirituality would delve into the toxic political arena, Williamson retorted, “The only reason it’s toxic, is because we haven’t gone there yet”.  Obviously, the political disengagement of most spiritualists wanting to avoid toxicity prevalent in our current political system is the most pressing reason, stated Williamson. Calling it time to “Invoke what is possible”, and “rise to the occasion” and that “there’s nothing holy about complacency” her message was that “in the space of love, so much more is possible.”

Reminding the audience of some political history when we as a nation looked away from what was going on, citing what other generations have gone through such as segregation and slavery to the civil rights movement, the suppression of women to the suffragettes that presented history with an odd dichotomy.  However, every generation decides what is the story that we will make the chapter of our time in this unfolding drama. She challenges us in the most articulate and soulful way, to be courageous and brave as we are facing challenges that could impact future generations if something isn’t done now. Justifying her spiritual stance, Williamson recounted that throughout American history when there have been major course corrections needed when we swerved from soulfulness, goodness, and decency while lured into institutions such as slavery, oppression, and segregation, it was always those from Religious and Spiritual communities that spoke up first. (i.e. Martin Luther King, a Southern Baptist).

Emily Pulitano was at the town hall meeting because she believes Marianne is the next President of the United States. “People want something different and she’s going to deliver that. We need a change in the form of a message of Love.”

One of her volunteers, Todd Augustyn from San Diego who has been with her since the grassroots effort that has brought her to the national stage says, “She’s the only person to bridge the divides. Her policies are outstanding. She is showing us a society we want and one I believe we can have with her as President.”

The most compelling and powerful part of the evening was instead of a typical Q&A after the talk, people were asked to close their eyes and take in the energy that was churned into the room, and imagine what was important to them, and call out one by one how they envision America.

“Back in touch with Spirit”. “An America with no walls”. “Bold Citizens”. “A nation respected because we lead with Love”. “Motivated by humanity, not money”. A collection of soft-spoken words called out from dozens in the audience envisioning an America united in Love.

Stating that California will be the early primary state this year and able to vote as early as February 3rd, 2020 and that by keeping her in the race with as little as $1 will give voters an alternative from a Creative Source, we might just be able to give birth to something new.

Certainly, setting an example of a never give up attitude, Marianne Williamson is changing the quality of the conversation in our current political system and has a deep influence on how many people are thinking. “With a political structure stuck in the 20th century and with the global shift into whole person, holistic thinking, if mindful, meditative people, religious and spiritual, people that are in psychotherapy, go to 12 step meetings, go to yoga and meditate, have read my books and have listened to me come out and vote their conscious – I think I’ll win!”