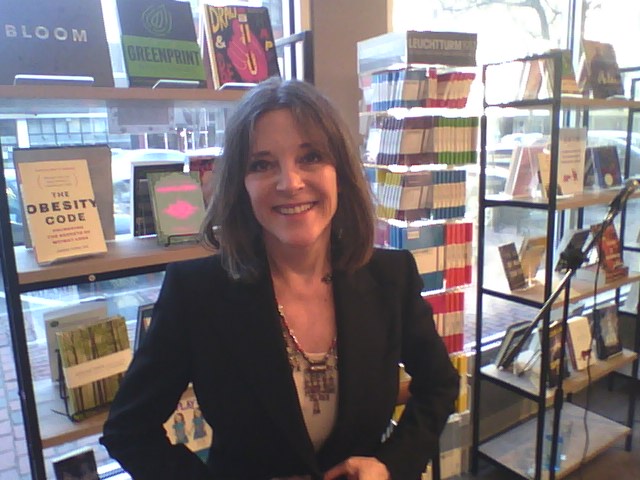 MANCHESTER, NH — “When you see a public teacher, tell them ‘thank you for your service.’”

This statement, made by Marianne Williamson during a post-campaign book-signing event at The Bookery Sunday exemplifies the former presidential candidate’s political and personal philosophy, one that focuses on elevating others.

An author of 13 books, Williamson has been involved with several charitable projects over the years. Some of these include: Centers for Living, a non-profit created in 1987 to help people with highly challenging illnesses, such as gay men suffering from HIV/AIDS; the Peace Alliance in 1998, an organization created to lobby and educate people about peace as opposed to war; and a series of conferences in 2010 called Sister Giant, designed to inspire more women to run for political office.

In 2014, she ran as an independent in California’s Congressional 33rd District. While she advanced past the primary, she lost the general election to Ted Lieu, who continues to represent California in the House of Representatives to this day.

After the campaign, she said, “I felt that if I did the right thing, I would have a win no matter what that means.”

While she was open about her failures in the campaign, she was also open about her successes. By using her platform to reach people and spread a message of hope, she was able to influence others in a positive way. That, it seems, has been her life’s mission since living a nomadic life in her 20s during which time she suffered from severe depression after a relationship ended. Her experiences during this time caused her to develop a desire to help other people.

When addressing a crowd gathered around bookshelves and in front of windows at the Bookery Jan. 12, kindness exuded from her. Her presidential campaign, which lasted roughly nine months and officially ended Jan. 10, taught her that “the system is more corrupt than I thought, but people are better than I could have hoped.”

Her problem with politics doesn’t come from any one person, but rather the system as a whole. While on the campaign trail, she has found that it’s not necessary for people to “wake up,” as the modern parlance goes. A lot of folks have already woken up. Rather, she warns against the danger of falling back into complacency. While the average citizen participates in their democracy every two to four years, corporate lobbyists participate in it every hour of each working day.

Though not everyone will succeed in winning elections or making the legislative changes they want to see, the point is to try rather than do nothing. The Founders, according to Williamson, did not specify that a president must have been a governor or a senator before announcing their candidacy for high federal office. In fact, the Founding Fathers would have likely disdained the return of Rome’s cursus honorum (course of honor) where political offices are seen as being more personally prestigious the more authority is available to them. Rather, the citizenry must decide for themselves through the primary process which sort of person with what background is most deserving of a nomination.

Towards the end of Williamson’s event, she invited Evelyn Lu Yang, Andrew Yang’s wife, to say a few words. Lu had only come to meet Marianne and to have a book signed. Nevertheless, when she spoke into the microphone, Lu was near tears, as she acknowledged the common thread of caring Williamson and her husband share.

For a moment, these two women were not politicians. They were not trying to sell anyone anything. They were not lobbyists for a corporation or propagandists for a media outlet. They were just two normal people in an abnormal situation doing the best they could.

At the end of the day, Williamson claims, this is all any of us can really do.

Whatever you think of Marianne Williamson or the fact that she ended her presidential campaign this week, is inconsequential.
WATCH VIDEOREAD MORE
Updates directly from our team