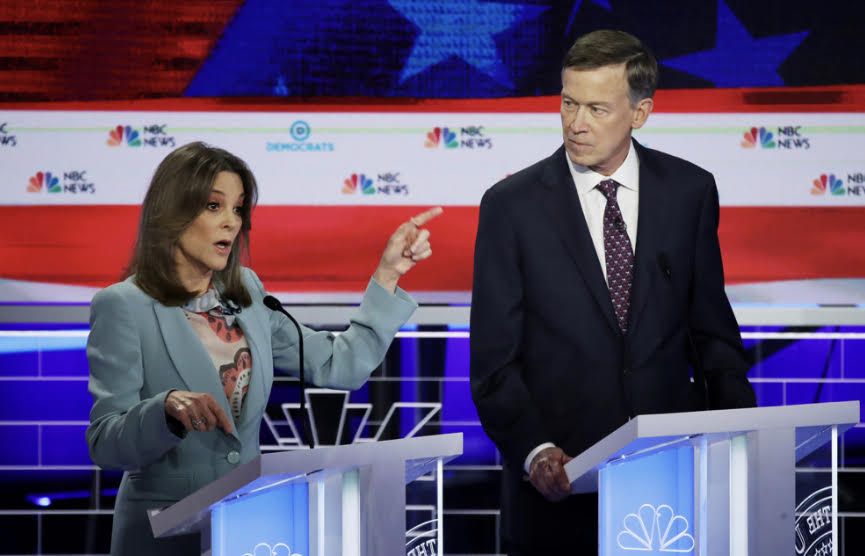 Marianne Williamson, candidate in the Democratic primary for the 2020 presidential election, tweeted a meme combining a quote from her writing and the landmark anime series Neon Genesis Evangelion, which has seen a resurgence in popularity after a recent streaming release on Netflix.

"Value does not derive from labour; it derives from self-actualization," the Evangelion meme Williamson posted to her Instagram account reads. "Everything we do to help people express themselves at a higher level puts value into the economy."

The words come from a June tweet by Williamson, who authored multiple bestselling spiritual advice books before launching her run for president in January. "As the 21st-century unfolds, it's time to completely debunk economic theories left over from the 19th & 20th," precedes the meme copy in the original tweet. This additional context more explicitly frames the sentiment as a refutation of the labor theory of value, often associated with Marxist analysis.

Many of Williamson's policy proposals align with the more progressive side of the Democratic primary slate, with a climate policy similar to proposals from Jay Inslee (though Williamson is for a "transition away from" nuclear energy), robust child advocacy, a Medicare buy-in path to universal coverage and a top-down reform of U.S. policing, with localized programs overseen by a federal Department of Peace. But Williamson separates herself on messaging, with a focus on the role of an individual in a spiritual collective, where economic metrics are insufficient to the task of evaluating human wellbeing.

Newsweek reached out to the Williamson campaign for additional context, but did not hear back in time for publication.

Exploitation of the working class leading to systematic undervaluing of labor―an analysis not necessarily dependent on a labor theory of value―is the foundation of Bernie Sanders appeal to the working class. Sanders has garnered support from a broad donor base, attracting employees of Walmart, Amazon and other big retailers, where low wages make for precarious living (particularly when health issues arise). But rather than an attack on Sanders directly, Williamson's tweet and subsequent meme is more accurately read as an appeal to the same discontents, replacing the economic idiom that dominates political discourse around human wellbeing by speaking to individuated, interior wellbeing.

Williamson's Evangelion meme can also be read more broadly, as a corrective or addendum to the liberal mindset that focuses on material conditions and assumes general wellbeing will follow. A consistent theme of Williamson's campaign has been reversing that causality, by turning individual spiritualities into a political force that shapes any response to material need and injustice.

Williamson's caption for the meme reads:

"The biggest problem with the world is that we do not show up for one another. We withdraw in judgment rather than extending ourselves into each other's lives. There is literally nothing we could not achieve where we willing to join with each other at deeper levels. Some people say, 'Stick with spirituality, Marianne; stay out of politics.' But that's like saying to an artist, 'Create something beautiful but never show it to the world.' Spirituality without application is dead. It's in the world of politics that transgression against a spiritual sensibility is the most egregious and most dangerous. Humanity will literally not be able to survive itself, if we do not awaken to our oneness and come to the realization that in love and love alone are we at home. Evangeline created this meme, and I saw it online today. Those are indeed my words, and I think people turning them into memes is utterly fascinating. What a way for the mind to process something. The use of lightheartedness can be a very serious thing. #bigtruth"‍

While it's unclear whether Williamson enjoyed the meme on its own, or is writing as a fan of Neon Genesis Evangelion, her caption is an apt exploration of many of the anime's themes. The series centers on a boy who struggles to find meaningful human connections, retreating into himself as alien "Angels" attack an environmentally devastated Earth.

The image in the Evangelion meme doesn't come from the 26-episode anime, originally released in 1995, but from the series-concluding movie, The End of Evangelion. The meme moment can be spotted in a fight between a mecha piloted by German wunderkind Asuka Langley Soryu and the "Mass Production Evangelions," which lack the spiritual, mind-to-mind, emotion-to-emotion bonding essential to piloting the show's titular giant, cybernetic organisms. The merits of human oneness against the confines of our isolated selves―separated from each other, in Evangelion lingo, by a literal "Absolute Terror Field"―becomes a key theme in the anime series, just as it has in Williamson's campaign.

Williamson addressed the practical application of these principles in her 4th of July address.

"If we want peace, you can't just endlessly prepare for war, you have to wage peace," Williamson said, from the stage in Concord, New Hampshire's Phenix Hall. "I'm going to tell you the main factors in peace-building, and it's not going to surprise anyone. Number one, expand educational opportunities for children. Number two, expand economic opportunities for women. Number three, ameliorate unnecessary human suffering. And four, diminish violence against women. We should see large groups of desperate people as a national security risk. Desperate people do desperate things. Desperate people are more vulnerable to ideological capture by genuinely psychotic forces."