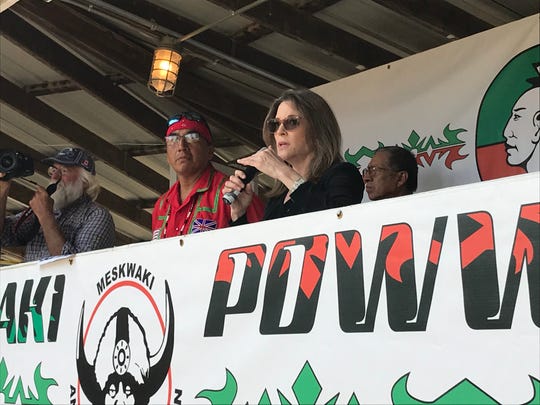 One of Marianne Williamson's first actions as president would be to remove the portrait of Andrew Jackson hung in the Oval Office by the Trump Administration, she told a crowd of hundreds attending the Meskwaki Powwow near Tama on Saturday.

The author and 2020 Democratic presidential candidate called the portrait an "insult" while discussing the need for a "deeper level of spiritual healing" between the country and the Native American people.

"The moment I get into the Oval Office, I will take that picture of Andrew Jackson down,” she said, prompting some applause and cheers. "It is an insult. I'm not Native American, and it insults me."

Jackson, the seventh president of the United States, has a controversial legacy due to his ownership of slaves and his treatment of Native Americans. He signed into law the Indian Removal Act of 1830, which displaced many Native Americans and eventually led to the "Trail of Tears," the deadly journey of the Cherokee people to relocate from land in Georgia to territory in what is now Oklahoma.

Williamson spent much of her five-minute speech Saturday discussing the need for healing in America that includes reparations for not only black Americans but also for Native Americans.

"We cannot go forward as a nation until and unless we are willing to clean up the past," she said.

Her "Native American Justice" plan supports returning dominant control of the Black Hills of South Dakota to the Sioux Nation, ceasing construction of the Keystone pipeline, improving the justice system in Native lands, protecting tribal sovereignty, protecting sacred sites and lands, and rethinking treaties that have limited Native tribes to make decisions about their own lands.

Williamson was among a handful of candidates who visited the annual Meskwaki Powwow over the weekend. Montana Gov. Steve Bullock also addressed the crowd Saturday afternoon and described his working relationship as governor of Montana with the state's eight tribal nations and programs to help with language preservation, job training and health care.

"No matter where you're living, whether it's Meskwaki Nation here or the Blackfoot Nation in Montana, every parent wants their child to have a better shot and a better future, and we've got to address systemic disparities to do that," he told reporters after his speech.

Saturday was Bullock's second trip to the Meskwaki Settlement during his three-month-old campaign.

Though he has not released a full Native American-focused plan yet, he said he believes he will announce one in the future.

"They seem to be more interested than they have been in the past," he said. "Especially the issue of missing women, especially Native American women."

The issue of the growing number of missing and murdered Native American women, which Bullock mentioned directly during his speech, hit close to home for the Meskwaki people in January 2015, when 41-year-old Rita Papakee went missing, Waseskuk said.

Waseskuk said the powwow is a good way to introduce the candidates to the people.