Marianne Williamson on Climate, Respecting the Right, and the Blind Spots of the Elite Media 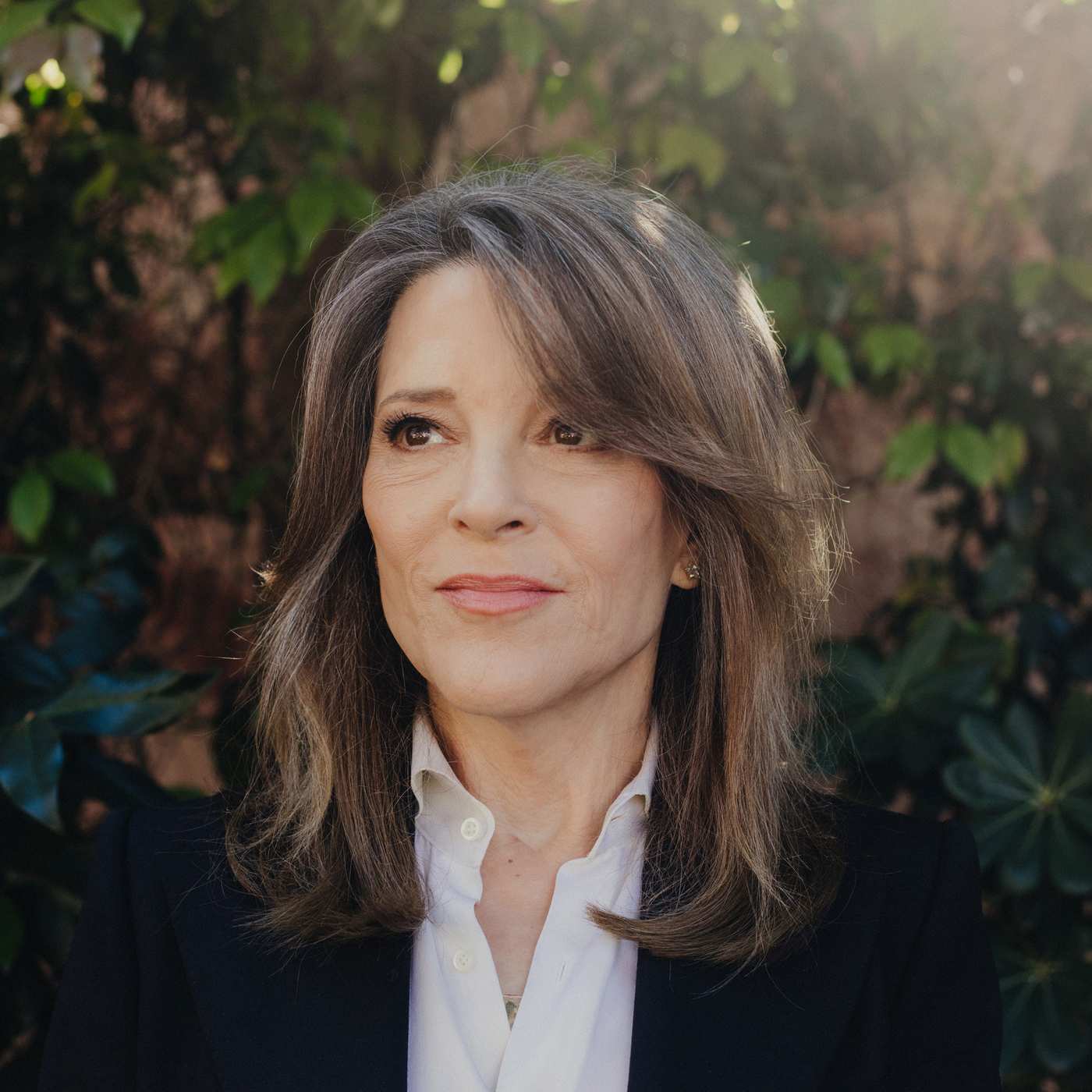 I cannot recommend enough walking on Georgetown University’s campus on a crisp fall afternoon alongside Marianne Williamson as she is approached by a PETA activist dressed up as a vertical cow. PETA passed Marianne some literature on the virtues of veganism, which she accepted as she nodded her head in shame. “I’m trying! I’m trying!” she said.

“Well, thank you so much! It’s the best thing that you can do for our planet,” one of the activists told her.

Eventually, when the self-loathing had subsided, she made her way to a black Lincoln Town Car and sped away — in the rearview mirror were the activists and MSNBC’s climate forum, which took place late last week on the Georgetown campus. (New York was also a partner in the forum, along with Georgetown’s Institute of Politics and Public Service and Our Daily Planet.)

But before all that, backstage at the forum, Williamson answered some questions about environmental policy and the media environment that treats her call to mindfulness like a joke.

Is it feasible for the world to stay below two degrees of warming?

We must. I think that’s what we need to see. This is really an interesting issue. We must be well below. The recent U.N. report on what 1.5 degrees means —

The U.N. says doing it would require a global World War II–scale mobilization.

That’s what we need.

But is that feasible?

It’s feasible — we fought World War II and we won. We’ve done it before and we can do it again. But with World War II, everybody understood what Pearl Harbor meant. Everybody understood what the enemy was. We’re so busy making each other the enemy today that we’ve lost sight: We’re so focused on the trees we’ve lost sight of the forest … We need to mobilize the people before we can mobilize the resources.

What is the role of nuclear power in addressing climate change, and do you think we can meet the U.N. 2030 timeline without expanding our nuclear capacity?

I think it’s risky. I think that we are living in such a state of denial. I think the same is true with nuclear weapons; we aren’t facing the whole truth here about what would happen if something went wrong. If something goes wrong with a nuclear facility, especially — we’re playing — we’re so close — we are failing to recognize how fragile life is. We are failing to recognize how fragile the ecosystem is. One mistake, one earthquake too close to a nuclear facility — we saw what happened at Fukushima. I’m not sure we’ve ever even totally faced some of the consequences. I think the public is kept in the dark about a lot of the consequences of Fukushima.

So you don’t think that we should have nuclear weapons?

Well, obviously the United States has about 7,000 right now, but definitely I would want to be a president working in the direction of nonproliferation. Ultimately, that should be our goal for this planet — no generation should live just for itself any more than any individual should live just for ourselves. We should be thinking about what this planet is going to be 50 years from now, 100 years from now. The U.S. Air Force has ordered 100 B-21 Raiders, and each B-21 Raider costs $560 million and each one drops both conventional and nuclear weapons. Now, you tell me: Why do we need 100 airplanes that drop nuclear bombs?

You drop five of those, it’s over for human civilization as we know it. You drop ten of those, it’s over for, probably, humanity on this planet. And every nuke that exists today makes Hiroshima and Nagasaki look like a pinprick. What are we doing? And that $560 million for each one of those planes — think what that would do for 13 million American children who go to school hungry or are hungry, who go to bed hungry, or 43 million Americans in poverty? So yes, absolutely, I believe that we’re talking about is profit for the nuclear industry. We’re not talking about wisdom when we talk about energy or national security.

Well, we’re very good at coming up with funds when it comes to national security, but not —

When it comes to poverty, or —

Well, we can when the people demand it.

Will they demand it?

Well, I’m running. So they have an option.

Climate change is a global problem, not just an American one. What can a president do to get the other countries of the world — especially those like China, India, and Brazil — onboard?

There is a lot of arrogance in the concept of American exceptionalism, and other nations, like recently Brazil, have sometims bristled at the idea that another country can tell them what to do on this front.

So how would you approach conversations or negotiations with other nations without condescending to them?

Well, that’s understandable. [Jair] Bolsonaro—he’s in the same club with Trump and several other leaders with obvious dictatorial tendencies and authoritarian personalities. Right now the Bolsonaros of the world get a wink-wink from Donald Trump. And there are all kinds of ways the United States can exert pressure on different counties. We give a lot of money, we do a lot of trade deals. There are all kinds of ways. The problem is right now that we have a president who gives a wink-wink.

How would you respond to the people who are ready to laugh you off because you discuss spirituality and the power of hearts and minds or similar themes?

I don’t think that the average American laughs it off at all. I think there’s a political and media elite filled with — they are not a monolith, but sometimes the political media elite talk about what the people think through the filter of why they think. They think people aren’t ready. That’s not my experience! My career doesn’t show me that people aren’t ready! My experience is that people on the left or the right are more than ready. Its the 21st century!

How do you puncture cynicism?

I think that with my candidacy I’m seeing that people are not cynical.

But how do you continue on without being on the debate stage?

Well, I’m here today. I spoke at the 92nd St. Y last night with Jonathan Capehart. I’m still out there. As long as there is a sense that I’m — you know, Martin Luther King said your life begins to end on the day you stop talking about things that matter. I’m talking about things that, to me, matter. Whether it’s the corruption of an amoral economic system. Millions of traumatized children. Our need for declaring peace. Reparations. A deeper conversation even about climate. As long as I’m speaking and people are showing up and I’m being heard, then I’m here.

What do you say to Americans — mostly on the right — who do not believe climate change is real?

You mean a patronizing attitude from the left toward conservatives?

That’s exactly what I mean.

How do you talk to them differently?

Well, President Eisenhower said that the American mind at its best is both liberal and conservative. I’m a liberal. I’m a progressive. I’m way on the left. But I understand that there are high-minded conservative values, and I understand that at the best America is a yin and a yang. There have been places where, even when I come down on the side of a progressive policy, factored into my thinking was a recognition where certain conservative principles had their place. That’s the point of a free society. Nobody has a monopoly on truth. That’s important to remember.

And you see as much on the left as on the right, this smug, self-righteous I’m right, you’re wrong; and that’s very bad for democracy. We need to be able to hear each other. Like I said, none of us has a monopoly on truth. There’s always something to hear from someone, even if your view or policy [is different]. I’ve noticed many times that my policy position didn’t change but my understanding of the larger issue changed because I talked to an intelligent conservative: And that’s important! And so I don’t think we should make the assumption that nobody on the right cares about the environment; that’s just obvious that’s not true. There are people even in Evangelical churches today who are more environmentally aware, etc.

You obviously got a lot of pushback for your tweet about the hurricane.

Can you help me understand what you were trying to say?

Listen, I had spent the weekend before in the Carolinas and in Georgia. I was in churches in Georgia and Carolina. I assure you they were praying that God turn that hurricane away. Are you telling me that all those people are stupid? Do you think those people don’t understand that there’s physics involved here? That those people don’t understand that there’s science involved here? The fact that you pray about something, that you visualize something, doesn’t mean that you’re less intelligent.

Do you think the media was being condescending?

Of course! As they have been — as some of them have been — about pretty much everything I’ve said in this campaign.