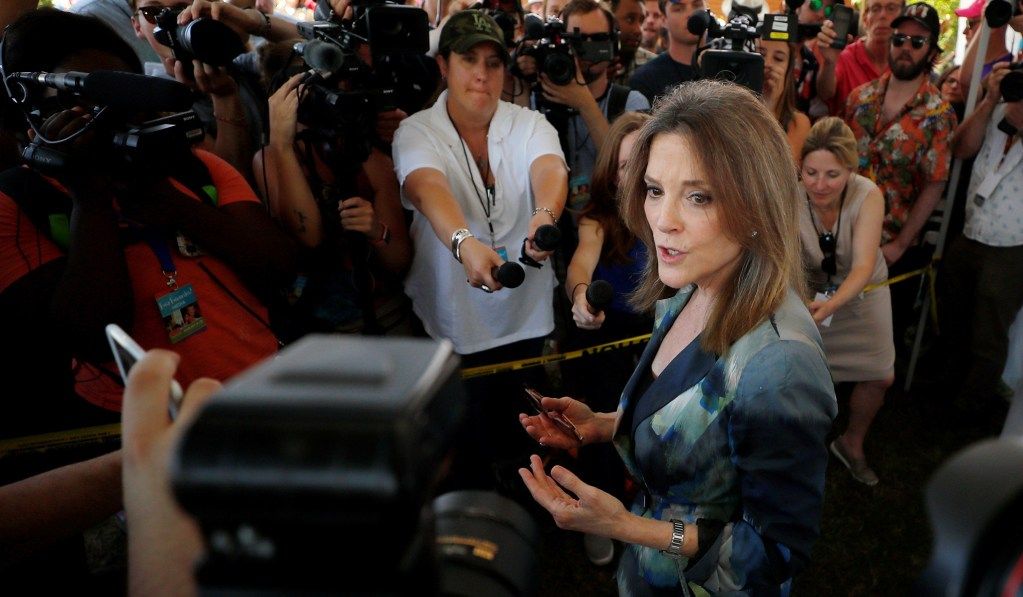 ‘In 1776, our founders brought forth on this planet an extraordinary new possibility. It was the idea that people, no matter who they were, would simply have the possibility of thriving. We have not ever totally actualized this ideal. But at the times when we have done best, we have tried. And when forces have opposed them, generations of Americans have risen up and pushed back against those forces.”

These were the opening words of Democratic candidate Marianne Williamson at the most recent Democratic debate: a parody of Lincoln’s famed Gettysburg Address, presented in Williamson’s trademark New Age rhetoric — an eclectic combination, to say the least.

If you are curious about the biography of the age-defying priestess-turned-politician who has shone on the Democratic stage, you’re not alone. During the debate, Marianne Williamson was the most Googled candidate on the stage. With multiple New York Times best-sellers, 3 million Twitter followers, and loads of media coverage by the likes of David Brooks and Ross Douthat, the Oprah-approved spiritual guru has become something of a national icon.

Although Williamson may be famed for her wacky sound bites and psychedelic wine-mom aura, her rise indicates a larger truth. At the Democratic debates, Williamson demonstrated her prowess behind a microphone, as she used the national platform with greater perception than many of her opponents. She has proven herself a candidate who understands what the country needs to hear: Americans don’t need another policy proposal — Americans need a restoration of faith in the integrity of their nation.

Williamson’s role in the race is something like that of a progressive counterpart to Jordan Peterson, reminding her audience that Medicare for All or free college won’t cure the deep-seated ills of despair and aimlessness affecting the nation. For Williamson, a nation in existential crisis needs teleological guidance. According to her campaign’s website, Williamson believes that

there is a groundswell of people in America who are seeking higher wisdom. We are rich and poor, progressive and conservative, young and old. And what we share at this moment is deep concern — concern about the direction in which our country is headed, the assaults on our democratic foundations, and the erosion of our human values.

The mission of her campaign is to search for this higher wisdom, “to create a new political possibility in America — where citizens awaken, our hearts and minds are uplifted, and our democracy once more becomes a thing about which we can all feel proud.”

This diagnosis is right — a growing number of Americans are feeling the pains of spiritual hunger and are searching to be fed. Through her words and deeds, Williamson has demonstrated that spirituality is relevant to everything, especially politics. In resounding closing speech fm the first round of Democratic debates in June, she pulled language from the New Testament in her challenge to Trump: “You have harnessed fear for political purposes and only love can cast that out. So I, sir, I have a feeling you know what you’re doing. I’m going to harness love for political purposes. I will meet you on that field and, sir, love will win.” Her words mirrored language from the First Epistle of John: “There is no fear in love, but perfect love casts out fear; for fear has to do with punishment, and whoever fears has not reached perfection in love” (1 John 4:18). Although blurred under the fog of her New Age aura, Williamson’s message carries a ring of timeless truth and is a forceful contender amid limp Democratic rhetoric.

Williamson’s unique oratorical style is a product of her eclectic biography. While she is best known as a Los Angeles–based author, lecturer, and all-around sage, Williamson has also pastored a congregation. From 1997 to 2002, she left her sunny life in California to serve as a senior minister at the Christian Church of Today(the name changed to “Renaissance Unity” under her leadership) in Detroit. The mission of Williamson’s former church, or rather “center for spiritual learning,” seems to be her political mission as well: to affirm an “environment that fosters positive self-actualization, personal responsibility, with unconditional love and acceptance.” For Williamson, theology is inseparable from political philosophy.

Her theology is unconventional, to say the least. She never went to seminary, and she is not attached to any single religion. Her theological training, however, can be traced to the foundational New Age text A Course in Miracles — a book Williamson credits with giving her life meaning and direction. It was upon reading A Course during her vagrant years in New York — after having dropped out of Pomona College to pursue a career as a cabaret singer — that Williamson was converted to its theology of love.

An esoteric compilation of metaphysical, spiritual, and psychological assertions, all mined from the world’s major religions, A Course in Miraclesis a curious creation. It was written by a Columbia psychologist, Helen Schucman, who claimed she was merely the scribe of Jesus, writing down what “the Voice” of Christ was telling her.

According to the preface of A Course in Miracles, the text can be summed up very simply this way:

Nothing real can be threatened.
Nothing unreal exists.
Herein lies the peace of God.

This central claim of the Course (which looks conspicuously like chapter 2 verse 16 of the Bhagavad Gita) reveals the mission of the text: to alter the readers’ understanding of reality, peeling away their perceptions and projections that obstruct a life of peace and love.

Taking insights from Judeo-Christian Gnosticism and a strain of Platonic idealism, the Course asserts that the material world is ultimately inconsequential. According to the Course, “the world we see merely reflects our own internal frame of reference — the dominant ideas, wishes and emotions in our minds.” We are called to liberate ourselves from our own subjectivity — a powerful idea in a culture where our own internal frame of reference is prized above all else.

While these tenets of the Course aren’t exactly novel, they offer a sense of grounding and freedom unavailable in the secular mainstream.  When Williamson encountered this paradigm of reality in her formative years, she was converted. The New Age tome prompted Williamson to write her first book, A Return to Love: Reflections on the Principles of “A Course in Miracles” (1992).

In its pages, Williamson summarizes her gospel: “Love is the essential existential fact.  It is our ultimate reality and our purpose on earth. To be consciously aware of it, to experience love in us and others, it is the meaning of life.”

Whether behind the pulpit or on the debate stage, Williamson has made it her mission to share the good news with others. Her preoccupation with the spiritual has granted her access to a resource that none of the other candidates have. Despite all her New Age regalia, Williamson knows how to sound like a philosopher, or maybe a mystic, every now and then. “We should be the party that talks not just about symptoms, but also about causes,” she asserted while discussing health care at the debate.

Williamson’s draw is her uncanny ability to drive straight to the spiritual heart of the issues at hand. She not only lays out the expected progressive ideology but goes further, housing it in a metaphysical context. While the Left of recent years has claimed a position of moral authority on the political issues of the day, Williamson actually provides something of an underlying framework for this demand. As her campaign’s tagline, “Turning Love into a Political Force,” exhibits, Williamson seeks to redefine why we have government in the first place. Her campaign has demanded “a politics that goes much deeper, . . . a politics that speaks to the heart.”

Williamson sees politics as a platform to heal the psyches of the American people. For her, politics isn’t about policy, it’s about an ongoing battle between wisdom and fear. In last week’s debate, she outlined what she believes to be the fundamental purpose of the government, as aligned with her theology of love. According to Williamson, the government ought to act as a magnanimous provider.

This is not just about a plan to to do it. It’s about a philosophy of governing. And I’ve heard some people here tonight, I almost wonder why you’re Democrats. You seem to think there’s something wrong about using . . . the instruments of government to help people. That is what government should do. It should — all policies should help people thrive. That is how we will have peace, . . . and that is how we will have prosperity.

While I am skeptical of the government’s ability to create the conditions of spiritual thriving, Williamson understands that the American people are starving for peace in a time of polarization, for direction in a time of deconstruction, and for assurance in a time of unforeseen global change. Although true peace will never be fostered by the White House, the content of our civic discourse plays a role in guiding the soul of our nation — a soul currently in great need of it. The nation is undergoing a crisis of culture — that ineffable collection of shared customs, social institutions, and beliefs — that is seeping into the political realm.

This era of Trumpian polarization is a result of an ongoing cultural cataclysm, not the cause of it. With our once-unthreatened understanding of selfhood, family, and civic purpose now being scrutinized under the microscope of the mob, our culture is in a moment of ecdysis. Americans have forgotten how to strive for lasting truth, and a gnawing despair has filled the void. There is no need to search for the latest statistics on rates of depression in the U.S. to know that we are experiencing an epidemic of discontent. Williamson’s theological politics of love and atonement begin to address this quiet desperation, as she declared in her closing statements at last week’s debate:

You keep talking about how we’re going to fight Donald Trump. You can’t fight dog whistles. You have to override them. And the only way you can override them is with new voices, voices of energy that only come from the fact that America has been willing to live up to our own mistakes, atone for our mistakes, make amends for our own mistakes, love each other, love our democracy, love future generations, something emotional and psychological that will not be — be emerging from anything on this stage. It will emerge from something I’m the one who’s qualified to bring forth.

The response to Williamson’s theological politics shows that our current moment of vitriol and mob passions in fact runs deeper than the political. Williamson is absolutely right that, to get ourselves out of this mess and fill the value vacuum that is draining the American spirit, we have to love each other, our democracy, and future generations. As reductive as it may seem, finding our way back to charity is as good a place as any to start. Williamson understands that we have to re-anchor our politics in the soul of each person rather than in the sparring of nameless groups and faceless systems. Although she is obviously a wacky candidate, Williamson’s aim of solving political problems with energy, atonement, and love is not as far out as it may seem.