Marianne Williamson Is The New Gladiator 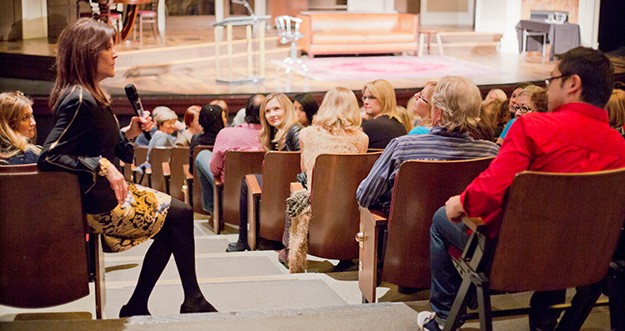 The Inquisition, McCarthyism, the Salem Witch Trials — all dark periods in our human history known for fear-mongering, paranoia, reputation smears, blacklisting and finding people guilty before they could defend themselves. Also, they were all periods that future generations looked back on in horror.

If you thought we had evolved as a society, I submit to you: 2020 Presidential Candidate Marianne Williamson. I have always been a Democrat and will vote for whoever the nominee is but the appalling way that this party has (and especially some women) forgotten its principles concerning Marianne Williamson, is enough to make me leave it after the next election.

The 2020 Election is perhaps the most important vote we will ever make in our lifetime. We must reject hate, racism, bigotry and corruption and vote in responsibility, transparency and unity before we do more damage to each other and the planet. Unfortunately, many in the Democratic Party have viciously turned on their own.

Disturbing is this rash of anti-Marianne Williamson articles by mostly Dem women under 40 (seemingly only interested in racking up likes) that apparently have no historical knowledge of the suffragette movement, the women’s liberation movement of the ’70s, or the gender inequality that still exists in the workplace and in politics. The fact that they would want to silence a woman without giving her a fair shot is a slap in the face to all the strong sacrificing women that came before them to allow them to even have social media platforms. When I was growing up there was just an understanding that women support women, no matter what. We should be lifting each other up and inspiring more women to speak up and run for office as allies. How does the total shredding of Williamson’s character out of the gate encourage that?

To me, being a Democrat means standing up for justice, fairness, tolerance, and truth. It means being compassionate and empathetic to our fellow citizens. It means fighting for our voting, religious and human rights. It means protecting freedom of speech and striving for equality among the races and sexes. It means following the Constitution and honoring our American ideals and principles. It does not mean tearing someone apart for their spiritual beliefs and political ideas just because they don’t jive with mine or ignoring their voice because they don’t hit an arbitrary number on an artificial poll sample. Everyone has a voice and deserves to be heard.

I’m convinced that any Democrat launching an attack on Marianne Williamson on social media has never actually listened to her speak for more than 1 minute. If they did, they would see that her policy positions and plans of execution are in line with most of the other candidates. If they looked at her website they would also see that unlike some candidates, she isn’t bought by special interests and wants to get money out of politics. She’s having a much more truthful conversation with the American people about love and faith in each other than any of the other candidates would even dare to have. Marianne Williamson however, gets slandered and raked over the coals — mocked like no one else.

Marianne Williamson’s first democratic debate performance in June was a pivotal moment where contempt and ridicule were unleashed by an angry Democratic mob unable to find a box to put her in. Even though millions of us knew of her amazing work, millions had never heard of her. In the brief time she was given, she said things that rang true with the American people, specifically on healthcare and on defeating Trump, to get the honor of “most Googled candidate” that night. People were open and curious.

Then in the next rigged “let’s only focus on establishment candidates” debate in July, she hit home again on the topic of reparations. Immediately the smack downs ramped up a level, so instead of just twisting her words, her critics spread outright lies … because when people feel threatened by something new, they attack.

It was the perfect smear campaign — just take years-old tweets or quotes written for a spiritual audience out of context and apply them to a political conversation. Through a series of lobbed libel bombs, she was portrayed as anti-science, anti-vaccine and dubbed “wackadoodle” and an “orb queen.”

Misleading Facebook articles about her supposed views on anti-depressants were making the rounds on my Facebook feed and I immediately called them out as a calculated hit. But by that point, many of my Dem friends had already made up their minds and written her off. Without the campaign finance resources of the other candidates, how could she stand a chance to counter the smears? While the other candidates spent time recruiting new voters, Marianne had to spend her time on damage control to refute the malicious falsehoods and to keep the voters she had. Campaign momentum suffered.

To be clear, she has never told anyone NOT to take medicine, nor has she any judgment of those that do. She has affirmed their use in treating diagnosed mental illness and enthusiastically endorsed the use of vaccines for public safety reasons. She only called into question the overprescribing of anti-depressants and the mass manufacture of vaccines by “Big Pharma” companies for their short–term profits. It is a legitimate conversation worth having with anyone who isn’t a lemming. Just this week, Purdue and the Sackler family, makers of Oxycontin, the major players in America’s opioid crisis, are declaring bankruptcy to protect themselves from being sued in the billions for the exact same overprescription claim. And yet, Williamson is painted as “irresponsible and dangerous” for even bringing it up?

Most alarming are the false, hypocritical and disparaging articles coming from journalists whom I used to respect; the journalists who are supposed to stand for the same Democratic principles I do. Not only did they stoke the fires by spreading outright lies but they put in zero effort into retracting or correcting their slanderous stories when she called out their erroneous reporting to defend herself.

And thanks to the Google algorithms and paid Facebook advertising, those headlines are the only ones new voters will see. When the media introduce someone as “dangerous” and a “longshot candidate” — guess what? That’s what they become. Repeatedly make it seem like she is “way out there” and bank on lazy journalism or adversaries to recycle mischaracterizing headlines as clickbait — a brilliant take down strategy!

She is also criticized for her spirituality and “her lack of it.” Politicians are constantly invoking God and “thoughts and prayers” these days over gun violence, even when they haven’t been to a church in years, yet Marianne dares to suggest a collective meditation for those in a climate emergency and she is lambasted from both the Left secularists and Right religious conservatives? Hindu, Muslim, Catholic, Christian, Atheist, whatever you practice, Americans are supposed to honor our religious freedom not condemn it.

Worse yet, some Dems tell her to just shut up and give up because she is unqualified. Last time I checked, every American has the freedom of speech and the right to pursue happiness. Running for office is hers. Maybe it was an accident that she was only given 5–8 minutes of debate speaking time, less than half of that given to the establishment candidates? I would say though that considering the DNC only used 10 out of 17 polls that they promised to determine eligibility in the 3rd debate, (also disqualifying Tulsi Gabbard from participating) that the campaign to keep her out is baked into the cake.

The fact remains that Williamson IS qualified to run according to our Constitution. The only 3 qualifications to run for the U.S. presidency are that you must have lived here 14 years, be a natural born citizen and be at least 35 years old, but I guess everyone forgot that. The framers left it open and up to every generation to choose who best to lead.

No one even acknowledges that in the last 5 years Williamson has paid for and put together national conferences called “Sister Giant” attracting thousands of people to further women in US politics, uniting Democrats and Republicans, or that she raised money and awareness for Bernie Sanders Campaign in 2016. Add to that her decades of civil rights activism, AIDS charity and volunteer work, charity fundraising and the thousands of people she’s inspired in speeches of faith in a better American future — ladies and gentlemen, she’s overqualified.

A simple comparison of Marianne Williamson’s frequent flyer miles with any current candidate’s total would show that she’s traveled the globe dozens of times over. She has an international following of millions of people of all races, creeds, and religions that follow her message of love and unity and read her New York Times best-selling books. She’s built international bridges over decades that none of these candidates could do in 4 or even 8 years. When it comes to diplomacy, she’s overqualified.

We have 13 months to go — that’s a long time. This isn’t the time to narrow our options. We should be encouraging diverse voices as Americans, not drowning them out. Isn’t that what we stand for? Polls are irrelevant at this point anyway. Trump’s being elected is proof. Even Jimmy Carter wasn’t at 2% at this point before he was elected President in 1977.

My criticism is really about a mob-mentality of condemnation — not so much of one single entity. Although between competing candidates hoping she drops out (while simultaneously quoting her talking points verbatim in their speeches); to the DNC’s behind the scenes rigged machine; to the big corporations she’s criticizing; to the blatant misogynists; to the mocking secularists — there’s plenty of players to choose from.

From what I see though, many Democrats have become a blood thirsty barbarous Coliseum crowd booing the brave new Gladiator Marianne Williamson and egging on the lions to go for the jugular. Twitter is the new Coliseum and a nasty tweet the new spear. Hurling digital spears anonymously has become the armchair sport of our time.

Last week I had a conversation that really stuck with me. “Maybe if I discover her fear, I’ll find her empathy,” said my friend about her child who was lately being dismissive and unkind to any new friendly people who greeted them. Her kid’s reaction was to dehumanize the “threat.”

So what is the Democrats fear — the ones hell-bent on needlessly crucifying and bullying lesser-known candidates before they are even heard? Why have all manners gone out the window as if they’ve been cast in a Real Housewives episode and are gearing up for a catty throw down at the nail salon?

American politics, much like America’s entertainment, is on the whole shallow, devoid of taste and dignity, ignorant of our history and apathetic to any change. When the sugar high of throwing anonymous shade online is addictive and our greatest achievement in life is a blue check popularity seal of approval from Twitter, we’ve got problems. We’re afraid of the future, we’re afraid of each other, we’re afraid of ourselves. But are we so afraid of stepping up to the plate for greatness that we’ve gone in the extreme opposite direction — becoming infantile, superficial and in denial of the real problems in need of solving?

The same thinking that got us into this mess won’t get us out of it. Marianne’s having a deeper conversation about how we treat each other and how love can be harnessed for good. If Joan of Arc were alive today, she’d hand Marianne Williamson matches and tell her to “set the world on fire.”