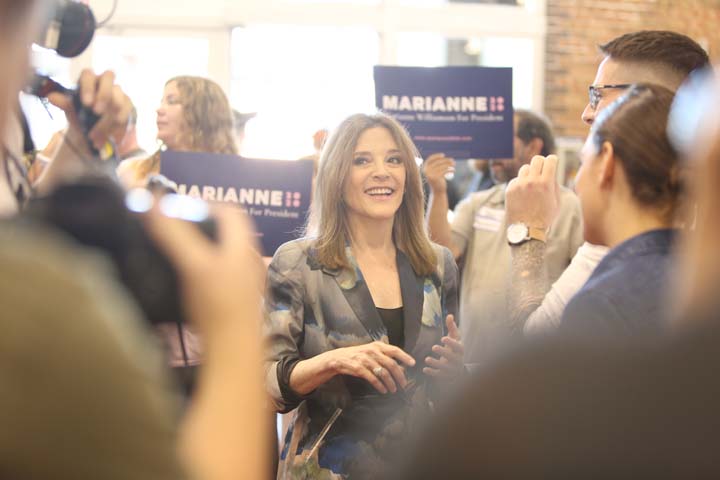 It was easy to see Donald Trump’s presidential run as a joke when he first emerged in the Republican primaries — “Donald Trump will never be president,” was written in the Washington Post. “He knows that. We know that.” (Turns out, we didn’t.)

Marianne Williamson’s 2020 Democratic bid was initially as easily viewed as a sideshow, but debates and interviews have revealed what attendees of her talk at 7:30 p.m. Friday at 1440 Multiversity will see firsthand — an intellectual, thought-provoking candidate, a progressive advocate for children, minorities, refugees and the environment. The victor of our last presidential election was a candidate who stoked anger and fear. Why not put one up this time — a woman, a Democrat — who is overtly for “love and light”? Might she be the perfect balancing opposition?

This idea might make it easier to comprehend Trump-supporter mentality: might be a sideshow, but I’m into it. Trump supporters threw themselves behind their own unlikely fringe candidate — also mocked on announcing his candidacy — all the way to the presidency. If you inverted Williamson’s and my stances on issues and general demeanor, you’d get Trump and a Trump supporter.

In policy and personhood, Williamson is Trump’s diametric opposite — to uncannily Jungian, cosmic-joke proportions. Her vision of an inclusive, love-fueled society stands diametrically opposed to his white nationalism.

Though she is Trump’s flipside, Williamson is actually of the same coin. The very qualities that set her apart from other candidates are ones she has in common with the current occupier of the Oval Office. Both emerged from Hollywood-world, delivered to politics via pop culture. They’re charismatic political outsiders, dramatic entertainers, idiosyncratic rhetoricians who hold sway over their respective specific and devoted audiences, PR firebrands, wealthy private citizens who fall outside the mold of “traditionally qualified politician,” and figureheads for national dichotomies. The idea of morality is central to both candidacies: Trump’s upholding of a mythical “traditional American identity” (patriarchal white supremacy) while Williamson calls for spiritual awakening based on love and inclusion (a matriarchal, feminine worldview). Both have been accused of hucksterism, which goes with the territory, though while our current president hawked steaks, bottled water, and housing discrimination, Williamson’s wares include spiritual healing, universal healthcare, and $200-$500 billion in reparations for slavery (she’s the only candidate to put forth an actual number), stating, “Racism is an American character defect, for which we must atone.”

Williamson hasn’t held public office either, but unlike Trump, she has dedicated her life to helping people, founding Project Angel Food, a nonprofit to deliver meals to the sick, in response to the AIDS crisis, and co-founding the Peace Alliance, which works to bring meditation into classrooms, teach peacekeeping strategies, and refocus the justice system in the direction of rehabilitation and re-entry.

If in order to tackle a problem, we must first understand it, Williamson is uniquely poised to tackle Trump. If our current pop president could transcend all prediction, why not an equal, opposing force to swing the pendulum to the other extreme of the national dichotomy? Their debates would be Marvel-worthy. Jung said, “Every descent is followed by an ascent,” and in Jungian terms, if Trump is the shadow, Williamson may well be what the country needs to achieve enantiodromia—equilibrium, renewed balance. Besides, after the semi-coherent fear-mongering coming from the Oval Office these past few years, an inspirational speaker is just what we need.

Does this sound insane? Maybe, but stranger things have happened. Would it be preferable to simply return to Democratic norms, when Democratic norms got us Trump in the first place? I’m not advocating being Williamson’s — or anyone’s — unquestioning true believer, but I am looking forward to seeing her onstage in the primary debates. If we’re to attempt a return to “politics as usual,” whatever that may look like in the post-Trump world, we need an antidote to the poison this administration has leaked into American democracy. Given what we have, Williamson and her spiritual awakening-slash-moral renewal may well be the best remedy. I realize this sounds like a New Agey thing to say. But is it? After all, we’re living in a whole new age.