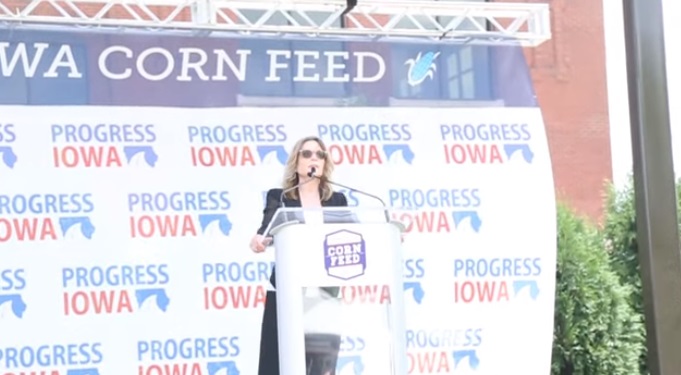 As trickle down economics, and advocacy for major multinational corporations has come to be more prime, get more care and get more support from the U.S. government than does advocacy for the health and well being of the American people, the people of the world, and the planet on which we live.

Ladies and gentlemen, if you think our just electing somebody who is the better version of same-old, same-old - which by the way, will not beat Donald Trump - then we are actually continuing to conspire with the erosion of our democracy. We repudiated an aristocracy in 1776 and it is time to repudiate it again.

As long as the undue influence of money has so corrupted our government that health insurance companies, and big pharmaceutical companies, and gun manufacturers, and chemical companies, and fossil fuel companies, and defense contractors and every other kind of corporate conglomerate is able to have their way with us, and as long as the best that we can do is to support candidates who will seek to diminish the pain produced by this, but refuse to challenge the underlying forces that all make that pain inevitable, then we the American people are conspiring with this nonsense.

We need to show that this whole idea of "all men are created equal," we mean it.

This idea that God gave all men unalienable rights of life and liberty and the pursuit of happiness --and not just Americans by the way: we mean it.

This idea that governments are established and instituted to secure those rights of happiness and its pursuit...we need to rise up and say, we mean it.

And you know that part of the Declaration of Independence where it says that if the government is not doing that job, it is the right of the people to alter it. We need to rise up and say, we mean that too.

When I am President of the United States, we will have a U.S. Department of Peace. We will not just endlessly prepare for war, we will wage peace. We will not just toe the line with short-term profit maximization of defense contractors for whom there is so much money to be made through endless preparation of war. With a 750 billion dollar military budget, but less than 1 billion dollars that we give to peace building agencies, when I'm president, that's going to change. Because in order to build peace, you expand economic opportunities for women, you expand educational opportunities for children, you reduce violence against women, and you ameliorate unnecessary human suffering wherever possible.

We will have a U.S. Department of Children and Youth, in order to do more than what the political establishment does now, which is simply to normalize the despair of millions of American children who go to school every single day in classrooms that don't even have adequate school supplies to teach a child to read. And if a child cannot read by the age of eight, the chances of high school graduation are drastically diminished, and the chances of incarceration are drastically increased. And yes, ladies and gentlemen, those children are in Iowa too.

The political establishment is only talking about the things they find convenient to talk about because they too have become prey to the corruption by which corporate profits are placed before the health and well-being of the American people.

It is time for the American people to wake up and to rise up. First in our minds, and to recognize we might have been fooled before, we don't have to be fooled again. You fool me once, shame on you. Fool me twice, who am I and what have I become?

And when we do that, of course we are going to repeal that 2018 two trillion dollar tax cut that gave eighty three cents of every dollar to the richest among us. We will put back in that middle class tax cut. We will finish those college loans. We will give free college in free state universities and colleges - why?  Because this country is supposed to belong to us. That is why we should have universal health care, That is why. We have plenty of money, We just need to stop giving it away to a few people who have propagandized us into believing it should all be theirs.

No, ladies and gentlemen, we should have an entirely new social contract in this country. Your country serves you. It vests you. And what you then do for your country, you become the man or the woman you're capable of being. You become the husband, the wife, the lover, the friend, the citizen, the father, the mother, the teacher, the creator, the producer - you go out and you become great people. We need to unleash the spirit of the American people. We need to uncap the dreams of the American people. Your government should uncap your dreams, your government should not thwart your dreams. We need an uprising, and to be honest, I think it could start with me. Thank you very, very much.

We have regressed to an aristocratic paradigm…

We have regressed to an aristocratic paradigm…
WATCH VIDEOREAD MORE

Bringing Our Core Values Back

Marianne Williamson on the 2024 election, the DNC, and third parties

Marianne Williamson on the 2024 election, the DNC, and third parties.
WATCH VIDEOREAD MORE
Updates directly from our team