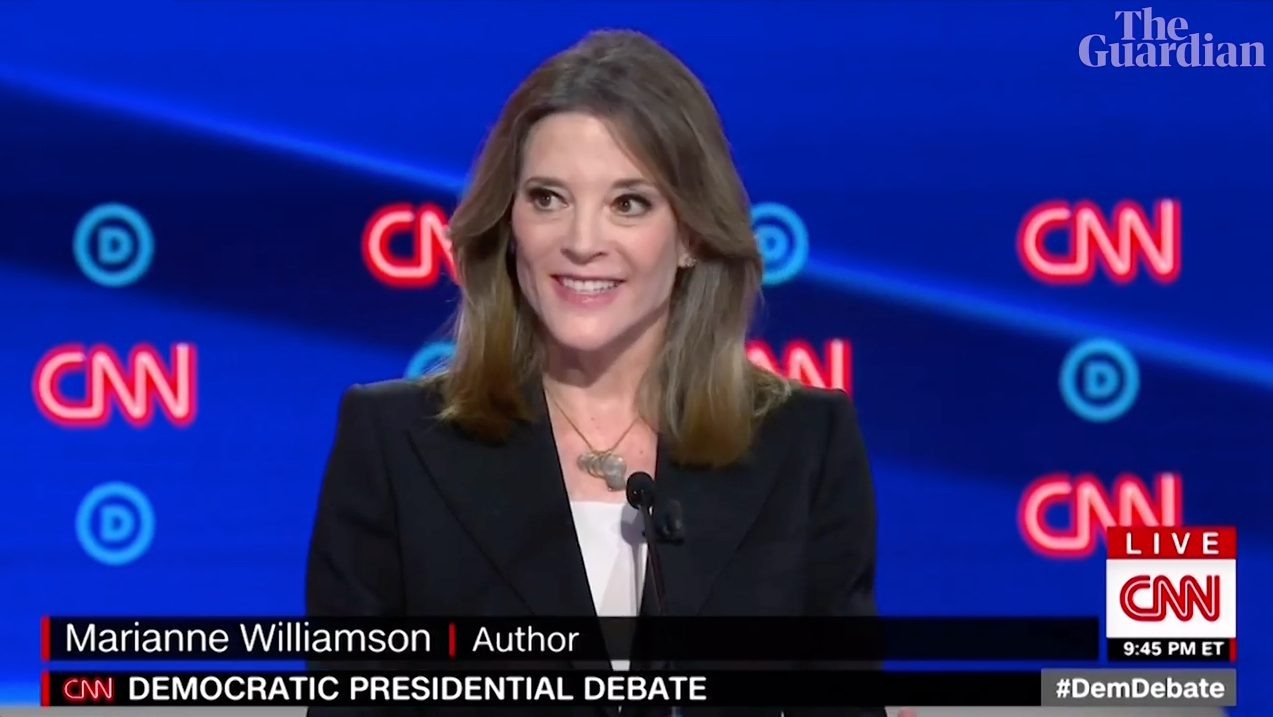 Last year, I ran for president.

At my CNN Town Hall, I said there was a threat of fascism in our midst.

At the Democratic debate, I spoke of “the dark psychic forces of collectivized hatred that this man has unleashed in our country.”

I said throughout the campaign that we needed radical truth-telling — especially about environmental, economic and criminal injustices against black people.

Vice, Rolling Stone NS the Daily Beast said I was a grifter and a joke who was “anti-medicine” and “anti-science” (a big surprise I’m sure to my GP, gynecologist, endocrinologist and breast cancer specialist).

I called for reparations, a Department of Peace, and a Department of Children and Youth to address the chronic trauma of millions of children more likely to end up in prison than at high school graduation.

Our establishment gatekeepers said I was a wacka-doodle crazy lady who told AIDS patients not to take their medicine (the whole point at that time was that there was none) and that I had no right to be running.

My point? The utter hypocrisy of those now wringing their hands and saying, “How did things get this bad?” I was in the belly of that beast for a year, and I have seen how things work in this country. There’s only one force powerful enough to have prevented the madness that’s now occurring, and which even now could cast out the demonic madness in our midst. And that is the voice of the American people. But the Democratic elite had as much disrespect for the real voice of the people, as the Republican elite have true contempt for it. The smugness, the arrogance, the utter blindness of the political-media-industrial complex paved the way for our monster-in-chief, and even now have no idea how to handle him.

And all those Republican Senators who know better and have refused to say anything — not to mention the Democrats who could’ve screamed a lot louder — do they actually think they themselves are going to escape his madness? That he won’t chew them up and spit them out once they’re no longer useful?

It’s not just that he is acting eerily like Hitler. It’s that we, the American people, have acted eerily like the mass of good German people who stayed in denial too long, until in fact it was too late. And everywhere you look these days — on social media, even among those whom you would never have thought in a million years would be taken in by him — there are Americans who actually believe that wearing a brown shirt is the sign of an awakened state.

Lincoln knew better, and maybe now so will we. In his Proclamation Appointing A National Fast Day, these were Lincoln’s words:

And whereas, when our own beloved Country, once, by the blessing of God, united, prosperous and happy, is now afflicted with faction and civil war, it is peculiarly fit for us to recognize the hand of God in this terrible visitation, and in sorrowful remembrance of our own faults and crimes as a nation and as individuals, to humble ourselves before Him, and to pray for His mercy, — to pray that we may be spared further punishment, though most justly deserved; ….and that the inestimable boon of civil and religious liberty, earned under His guidance and blessing, by the labors and sufferings of our fathers, may be restored in all its original excellence: —

Lincoln was not a joke. And neither is the threat now in our midst.

There’s no ending systemic racism without ending the entrenched economic injustice that keeps it in place.
WATCH VIDEOREAD MORE
Updates directly from our team