I’ve worked for Marianne Williamson. She is no kook. 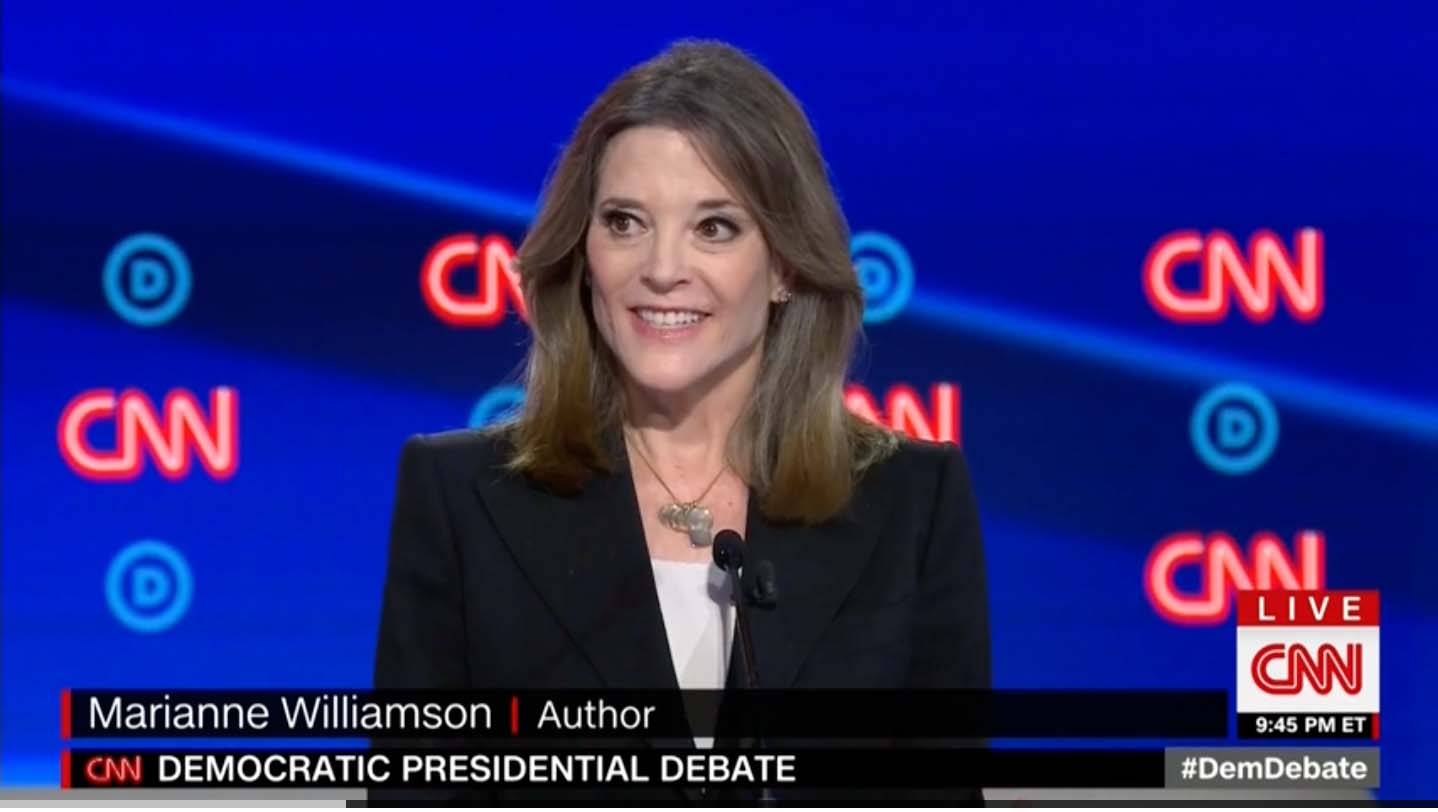 In a surprise twist on the first evening of the second Democratic debate, spiritual writer and presidential candidate Marianne Williamson received some of the night’s largest applause lines. She ably argued for paying financial reparations to black Americans, criticized the panel of her competitors for corporate funding and displaying an out-of-touch “wonkiness,” and accused President Trump of emboldening a “dark psychic force” of “collectivized hatred” among the American people.

Viewers who have been following the news will be excused for not recognizing her. This was not the Williamson who has been caricatured by some in the media as an unqualified hippie healer and who Rolling Stone needled as “the cosmic sorceress this election needs” and who Salon.com said should be elected “Secretary of Crystals.” Nor was this the Williamson who was snubbed by Vogue when they photographed the female Democratic candidates because they didn’t consider her serious enough. No, the Williamson who stood in the second debate more closely resembles the poised woman I know and worked with for several months. And she is no kook.

Williamson and I first met for lunch at the Soho House in New York City on Feb. 2, 2018. She sauntered in with the aura of a reincarnated Judy Garland — classy and charismatic, like a woman stepping out of a bygone era. Wearing a pressed black pantsuit, she used sophisticated words reminiscent of black-and-white films.

I don’t remember the specifics of our lunch discussion, but Williamson phoned me the next day and said she felt compelled to meet again. I agreed, and a few days later, at her Midtown residence, she confessed that she had been experiencing writer’s block with her recent book and needed help getting unstuck.

As a consultant to many authors, I often help writers structure their books before they get to a publisher’s editor. I worked for Williamson for five months in 2018, helping her to reorganize and rewrite some parts of her book “A Politics of Love.” I no longer work for her, and maintain no affiliation with her campaign.

Marianne told me she felt a stir in her spirit that I was supposed to collaborate with her on her newest project, so I needed to just go ahead and say “yes” so we could get started. During the months I worked for her, I grew accustomed to this kind of decisiveness and sensitivity to spiritual stirrings, but when Williamson first requested my help, I was somewhat mystified by her request.

She is the author of more than a dozen books and four No. 1 New York Times bestsellers, so it was difficult to imagine her needing help from anyone. And even if she needed help, I was a peculiar choice. I was raised a Southern Baptist by an evangelical megachurch preacher. I attended the conservative Liberty University and earned a graduate degree in religion from an evangelical seminary. Though I’m no longer conservative, I’m still very much a Christian. I’m proudly Protestant, attend church most Sundays, and feel no compulsion to cross my fingers when I recite the Apostles’ Creed, an ancient statement of Christian belief.

Williamson, by contrast, is Jewish by heritage and practices a faith rooted in the 1976 book “A Course in Miracles,” recently described by The New York Times as “a curious mystical text” and “an esoteric Bible … produced by a Manhattan doctor [Helen Schucman] who believed she was channeling new revelations from Jesus Christ himself.” According to alternative spirituality expert Mitch Horowitz, the course teaches “that illness, emotional torment, fear, self-doubt, prejudice are all simply illusions.” Yet many of the teachings in the Course are merely truisms based on love, hope, peace and other virtues shared by the world’s great religions.

In the end, I decided to work with Williamson on her book. After all, the book was about politics, not “A Course in Miracles” or religion proper. I’ve coached and collaborated with dozens of authors who personally hold to a different worldview or theology than mine.

Sure, Williamson has made some statements that seem odd to many Americans. Cue Buzzfeed for the aggregated tweets. Some in the media have used her words to construct a distorted portrait of a wacky woman with weird beliefs. Perhaps “weird” is just what we call unfamiliar religious beliefs and those who hold them.

And to be honest, I feel more affinity with a peace-loving Williamson right now than I do with some of my Christian brothers and sisters who seem happy to tolerate a resurgence of sexism, white supremacy and homophobia in our country so long as the stock market is soaring.

I worked alongside Williamson as she chipped away at her manuscript. When I suggested a change in direction, she would lean back in her chair, squint and work through every counterpoint, often citing quotes from memory attributed to great thinkers across a range of traditions.

One day, we worked while facing each other in two chairs next to the window with an ottoman between us. Unbeknownst to her, I was harboring distress from a recently failed relationship. We tapped away on our computers silently until she suddenly closed her laptop, cleared her throat and said, “Jonathan, I need you to tell me what you’re thinking about right now because I believe it’s the most important thing in the world to you right now.” Tears pooled in the corner of my eyes before she finished the sentence, and as I recounted my distress, I was met with a rush of compassion. She listened intently — never breaking eye contact — and then, after offering a few words of advice, she grabbed my hand and prayed for me.

Admittedly, Williamson hasn’t always effectively conveyed her intelligence, humor, warmth or sense of normalcy on the campaign trail. The first Democratic presidential debate was not one of her shining moments, as even she would tell you. That night, Williamson stood at the end of a line of mostly establishment candidates in a lavender suit. When the moderators finally started to acknowledge her presence 30 minutes into the debate, her answers seemed eccentric to many.

Viewers were perplexed when she hypnotically stared into the camera and spoke directly to President Trump, informing him that she would beat him in the general election, not by proposing better domestic and foreign policies that benefit all Americans, but rather by “harness[ing] love for political purposes.”

As a person of deep spirituality, I understand the radical reordering of political priorities that Williamson was trying to communicate. Her vision for America is rooted in the belief that shuffling partisan political priorities will make only a marginal difference. Our country needs a moral revolution. But Americans who have grown intellectually lazy by consuming a steady diet of Instagram threads and reality television struggle to connect with sweeping ideas. They want quick, simple, consumable and shareable talking points. And this is not Williamson’s bailiwick.

On The Late Show last week, host Stephen Colbert asked whether her lack of experience made her a risky candidate in the mold of Trump, Williamson responded: “The president’s problem is not that he lacked political experience. The problem is that he lacks ethics — and he seems to lack a visceral taste for democracy.” She added, “A lot of experienced politicians led us into Iraq. And anybody who says that I’m an amateur at what they do, I’m sorry, Stephen, they’re an amateur at what I can do.”

That was a more accurate picture of the woman I know — eloquent, thoughtful, pointed. You may not like her policy proposals as well as another candidate, and you may not trust her lack of formal political experience, but do not believe the distorted picture of an unhinged “woo-woo” woman that some in the media have painted.

I visited Marianne at her apartment late last summer after we finished working together, and she was in the kitchen brewing me a cup of turmeric tea like she did for me each day. We chit-chatted for a minute or two, and then she grew uncharacteristically quiet. As my tea steeped, Williamson looked at me, and her face softened.

“Jonathan, I need your advice,” she said, “I’m thinking about running for president of the United States. You know me, and I trust you. Do you think I should run?”

She is a woman of confidence, but there was a humility in that question that too few public servants possess. She was asking me to be dead-level honest with her, and I was determined to offer her nothing less. I told her, “If you decide to run, I doubt the media and the political establishment will give you a fair shake, and you need to be prepared for that. But I am certain of this: America needs a president like you.”

Jonathan Merritt writes regularly on religion as a contributing writer for The Atlantic and author of “Learning to Speak God from Scratch: Why Sacred Words are Vanishing - And How We Can Revive Them.”