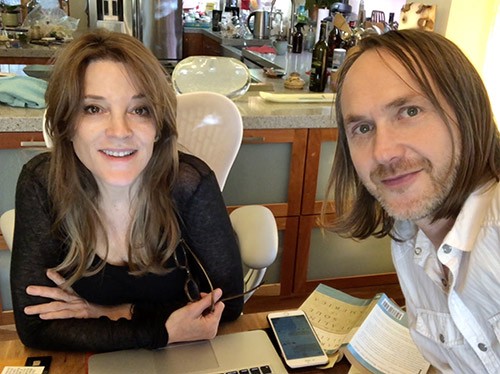 ‍
Having worked up close and personal with Marianne Williamson over the last two decades, particularly in the arena of politics and social change, I have been endlessly frustrated by the false caricatures generated about her during her Presidential run, and for the false depictions of her political background. There are many misrepresentations, but there are two that are particularly glaring related to my experience working with her. One relates to the lack of awareness about her prodigious background in politically-focused social change work. The second is the mischaracterization of her long history in support of, and passion for, public policy.

The false framing that’s been perpetuated about her run for the presidency started early on and with intensity. She was often labeled simply as a “New Age Guru,” who was likely just trying to sell more books and should “drop out of the race” to leave space for those “more qualified.” The perception of her has thankfully evolved in the past few months, as many more citizens and even pundits now see her as a serious thinker and candidate who has something unique to offer this campaign season. Yet there are still some significant areas of her work and legacy that need to be examined and articulated in the careful manner they should to allow the American people to fairly asses her skillset and what she would offer as President.

First of all, Marianne Williamson, the woman I have known and worked closely with, has spent as robust an amount of time focused on and working for political and social change as she has on spiritual and personal growth work, for which she is most known. Millions of people have experienced and been positively impacted by her efforts in the latter arena, which has understandably garnered outsized attention. The political work received less notice from the mainstream, and certainly wasn’t financially lucrative (in fact sometimes it was a detriment to other parts of her career). But that is not something she cared about. Her deep and abiding passion for transformative social change overrode other concerns.

While her early work and advocacy in support of HIV/AIDS patients has achieved well-deserved notice, little attention has been paid to her grassroots organizing work focused on helping citizens better engage in the democratic process. She has worked tirelessly to help the average person make their voices heard and have their influence felt on behalf of a whole host of other issues she feels are critical to a flourishing democracy. The specific areas she has worked most passionately towards have included: getting the undue influence of money out of politics, advocacy for children, peacebuilding, criminal justice reform, racism, and poverty, among others.

Marianne’s work in this arena had a particularly profound effect on me, helping inform and launch my own career in political advocacy. As a young graduate student and activist in the mid-nineties, who was deeply affected by her spiritual writing and thinking, I would go onto her website’s political discussion forum to talk with her and others about the state of the world. I was thrilled that someone I respected in the consciousness realm was so sincerely considering these issues. It was a much deeper conversation than I was hearing other national figures discuss. When I learned that Marianne was working on a politically themed book that was exploring the intersection between spirituality and politics (1997’s The Healing of America), I was elated because it was a topic that was largely missing at that time in the mainstream left-leaning, overly secularized public discourse (and it still is). I observed her intense passion and work for these issues then and it has continued to grow and expand even more powerfully in the ensuing decades.

During that early time in my own activism, one of the concepts that she most forcefully urged on in me and others was the belief that we, the average American, were the real hope for change in our great nation. In the spirit of two of her key social change influences, Dr. King and Gandhi, Marianne’s passion around the role of the ordinary person as the real driver of change in a democracy has always been a central motivating force in her activism. I have seen firsthand her profound commitment to help awaken the giant within the American citizenry.

Over the decades, she’s organized and facilitated hundreds of trainings and events focused on civic engagement, grassroots organizing, motivating progressive people to run for local, state and federal office, as well as numerous other related political and social justice efforts. This also included hosting numerous events in Washington DC, where she helped organize and inspire citizen lobbying efforts on the Hill in support of policies she felt important.

Some of the early work included organizing people in cities across the nation to hold Peace Circles and Citizen Salons, where they would converse and make plans for deeper, coordinated social and political engagement. Particularly after the tragedies of 9/11, and during the run up to war, Marianne helped organize hundreds of these Peace Circles, which would happen regularly around the nation, as a space for people to process what was going on and collectively find ways to engage in a more productive and peaceful manner to make positive change. So many people found this offering incredibly helpful during a very scary time.

After 9/11, Marianne also recognized the dark downside to the heavily promoted strategies for war in Afghanistan and Iraq. She spoke out against these strategies forcefully and often — even when it turned off parts of her audience. Around that time, Marianne organized many activists in support of Ohio Congressman Dennis Kucinich’s legislation to establish a U.S. Department of Peace as one important way to more systematically address violence and terrorism, looking at root cause solutions — a theme she returns to again and again.

Also around this time, Marianne founded The Peace Alliance (www.peacealliance.org), a national non-profit grassroots educational and advocacy organization. Since its founding in 2004, The Peace Alliance has cultivated a grassroots network that’s included over 100,000 supporters, focused on transforming how individuals, communities, and nations respond to conflict and violence, through prevention and smart interventions.

Over the years, Marianne, her partners, and thousands of on-the-ground grassroots organizers have championed evidence-based peacebuilding legislation and policies by encouraging policy-makers, the media, and the public to support smart and proven to be effective conflict and violence prevention approaches — which get little attention or support compared to the military and punitive criminal justice system methods that dominate our investments.

The Peace Alliance has provided critical backing for the passage of key domestic and internationally focused peacebuilding policies and legislation, helping lead efforts to secure over $110,000,000 in funding for international peacebuilding efforts, among other notable legislative achievements. They have facilitated thousands of grassroots lobbying trainings, conferences, citizen-led congressional meetings, and helped mobilize action for change.

In 2010 Marianne launched Sister Giant, an initiative that conducted a series of conferences and trainings focused on women and politics. The purpose was to incubate ideas and contribute to plans by which we can help move America in a more enlightened direction. Thousands of women, and men, have participated.

These are only a few examples of the work she has been up to in the political and social change lanes.

As all of this should definitively demonstrate, Marianne is very much committed to and passionate about policy work — despite the false narrative that is still getting too much play in the media and with punditry. Her long history of getting citizens behind and working for specific policy proposals, as mentioned above, is undeniable (not to mention that she was one of the first candidates to announce her bid with a full array of specific policy proposals, spelled out on her website).

However, for Marianne, it certainly is the kind of policy that is important. Her unique focus has always been on delving into the underlying causes that propel many of the collective challenges we face — and most especially to their solutions. She has long seen the mainstream political conversations, and many of the ultimately lightweight and/or misguided policy prescriptions, as shallow. She has committed herself to a deeper probe, looking for underlying causes and resolutions. And I believe that many of the prescriptions she has identified and called for would help to fundamentally shift our world for the better.
‍

I have myself been inspired and motivated by Marianne’s long and committed efforts to create social and political change, and I have had the profound pleasure of working with and witnessing countless people who have also been inspired and motivated to engage politically because of her activities. This is a unique leadership quality that I think would serve our nation well in these divisive and challenging times, where we need to motivate the masses to get behind fundamental shifts in how we function and to help prioritize needed policy prescriptions. It’s time she is given credit and acknowledgment for the whole story about what she has been up to in her career. It’s a disservice to her and to the democratic process to ignore the full picture.