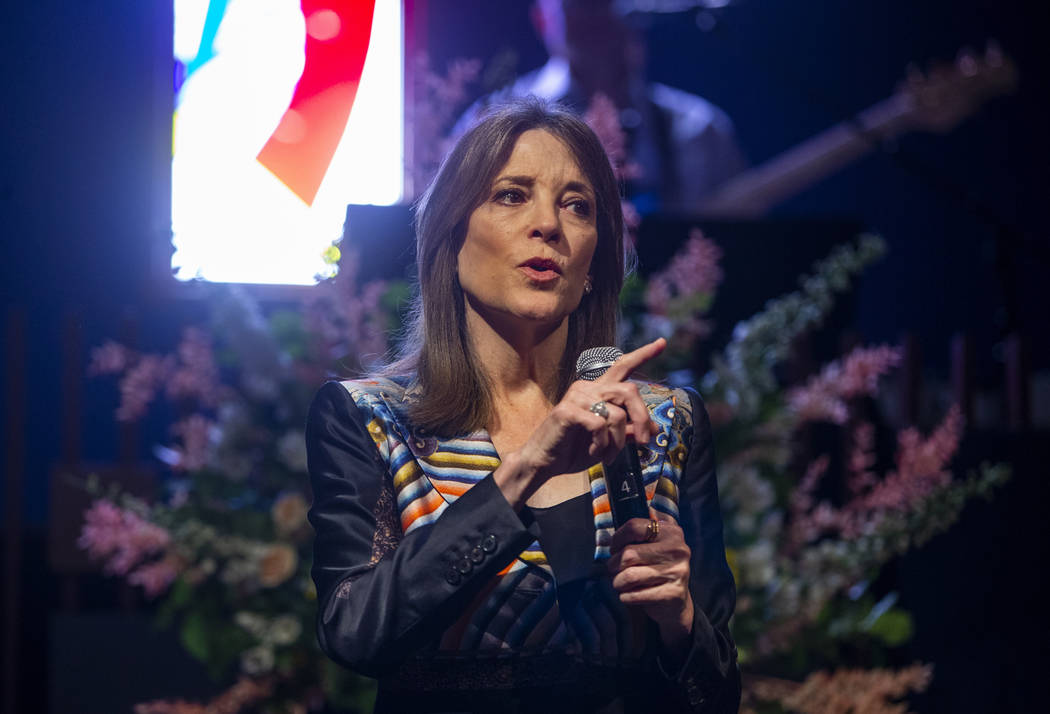 Democratic presidential hopeful Marianne Williamson rounded off a weekend of Las Vegas appearances with a Sunday morning speech at the Center for Spiritual Living Greater Las Vegas that focused on subduing the hatred flowing through mass shootings in El Paso, Texas, and Dayton, Ohio, while bringing back a sense of morality to politics.

She called the El Paso shooting “a massacre” and accused President Donald Trump of giving “legitimacy and passive support” to white nationalism. She said the recent violence is “the meaning of hell on earth.”

The author of seven books weaved through various religious and spiritual ideologies in a roller coaster of a 33-minute speech to the standing-room-only crowd at the center, 1420 E. Harmon Ave. It dipped in and out of politics, theology and self-help, as Williamson often made larger moral observations that she would then drill down to politics.

She said that the country was trying to fight a darkness manifested through racism, homophobia, xenophobia and other hatred, but “you can’t fight darkness. You have to turn on the light.”

Williamson said the country needed to look at its foreign and domestic policies that fund genocide in Yemen and allow children to go to school without school supplies or food and realize these problems must be fixed. America needs to return to making moral, decent decisions.

“(Some policies) have nothing to do with good,” she said. “It has to do with a few people making money.”

She said religious and spiritual leaders must “be the adults in the room” when it comes to hatred in America, because they know evil exists.

As with previous campaign stops, she stressed making a priority out of education, feeding the hungry and helping people and their communities as much as possible. She said that “large groups of desperate people are a national security risk,” saying that the worst things are possible when desperate people are forced to do desperate things.

“It is not some sort of fuzzy-hearted liberalism to help people,” she said. “It’s the only smart thing to do.”

Williamson said a higher power will be needed to address “white nationalistic rage” in America.

“I am not saying I can do it,” she said. “This is not about what we can do. It’s about what a higher power can do. And that is what we need now. There is no mortal power that alone can deal with the force of white nationalistic rage in this country. There is no reason for us to believe that it is going to stop any time soon.”

Williamson was one of 19 candidates to appear at a forum Saturday in Las Vegas hosted by the American Federation of State, County and Municipal Employees. She also held a town hall at the RYK Yoga and Meditation Center on Saturday evening.