‘I Should Be More Careful With Twitter’: Marianne Williamson on Those Mental Health Comments 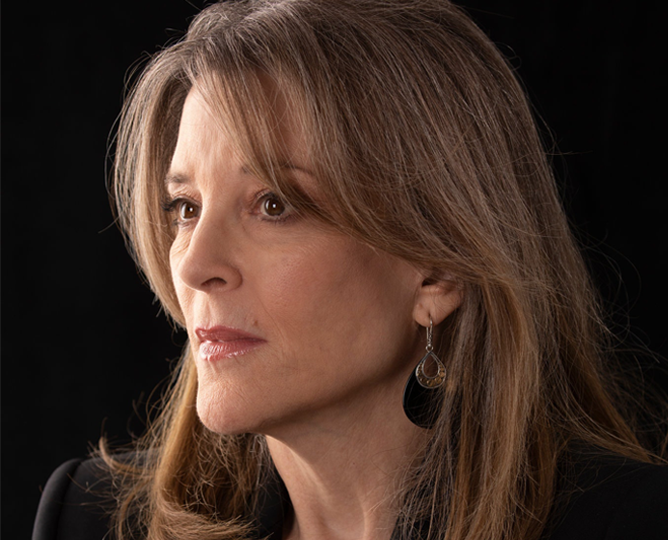 When the self-help author Marianne Williamson appeared on the presidential debate stage last month, Twitter users delighted in unearthing her old comments about vibrations and “morphic” fields. But her performance also put a spotlight on much more serious comments about mental health.

In books, interviews and posts on social media, Ms. Williamson has criticized the widespread use of antidepressants; suggested they were to blame for some celebrities’ suicides; characterized treatment guidelines for postpartum depression as a way for pharmaceutical companies to make more money; and called the distinction between ordinary sadness and clinical depression “artificial.”

How widely antidepressants should be prescribed, and under what circumstances, is a real debate among psychiatrists. But Ms. Williamson has tended to make broad arguments, suggesting that the drugs are hugely and recklessly overused. Mental health experts say comments like these can increase stigma and make people less likely to seek treatment, even if that is not the intention.

In an interview with The New York Times earlier this month, Ms. Williamson — a celebrity in the self-help world who gained a large following in part through her association with Oprah Winfrey — said that she had never told anyone not to see a doctor, and that she understood clinical depression was real and sometimes necessitated medication.

“I have no judgment — nor do I believe I have ever expressed any — of anyone taking antidepressants,” she added in a text message after the interview. “I’m happy for anyone who is finding the help they need for any ailment whatsoever. My problem is not with antidepressants per se, which clearly have and do help many people. My problem is only with their overprescription, and the practices of pharmaceutical companies when drugs are marketed in predatory ways.”

Before granting the interview, Ms. Williamson asked me to read her book “Tears to Triumph.” Its premise is that trying to avoid or suppress emotional pain is often destructive, and that such pain can be a “spiritual journey.” In the book, she describes depression and anxiety as results of a society “that repudiates love” and urges readers to heal themselves by surrendering their suffering to God and rising “above the thought system that creates it.”

She also says she has twice received diagnoses of clinical depression, and writes:

However deep my suffering, I didn’t want to be anesthetized as I went through it. Like an expectant mother who wants to give birth naturally, rejecting drugs during labor because she wants to experience “natural childbirth,” I wanted to be fully available to the depths of my pain. Why? Because I knew it had something to teach me. I knew that somehow, in some way, my suffering would lead to a blazing new dawn in my life — but only if I was willing to endure the deep, dark night preceding it.

Ms. Williamson spoke with The Times for almost an hour. These are edited excerpts from the conversation.
‍

On clinical depression: ‘It’s not always a scam at all’
‍
In your book, you criticize the drawing of a distinction between “sadness” and “depression.”

I have never weighed in on anything like bipolar, schizophrenia, obvious mental illnesses, for which psychotherapeutic drugs have what seem to me to be clear benefits and lifesaving effects. I’m not getting in anyone else’s lane. But the pharmaceuticalization of normal human despair is other people getting into my lane. There are issues of normal human despair that hundreds of years ago were seen as the purview of religion and spirituality, and the baton was passed in many cases to psychotherapy, and then, what seemed like overnight, it was passed to psychopharmacology.

How does medication for physical conditions work “with” the immune system in a way that psychiatric medication doesn’t?

I’m not specifically saying what you just said. I’m just saying that the immune system of the body is respected. If I have a bruise, it’s simply going to take time for the bruise to heal. The fact that the bruise takes a while to heal does not mean something’s wrong.

Traditionally, people recognized that grief was a part of life. These days people talk like, “Your mother died, it’s been a month, aren’t you over it?” What I’ve seen is this very unhealthy pressure on everyone to be happy all the time. The fact that you’re sad today doesn’t mean that there’s something wrong with you. Maybe it’s just, something sad happened.
‍

Your book says, “The medical profession has appropriated the topic of depression, separating the words ‘sadness’ and ‘depression’ in an artificial way that serves no one but the pharmaceutical industry.” Does that mean clinical depression doesn’t exist?

I don’t challenge the idea that it exists, and I’m sure there are people for whom psychotherapeutic drugs, including antidepressants, are very helpful. What I’m saying is that the term is used so loosely today, that people who I have seen experiencing what I consider a normal spectrum of human despair have been termed “clinical depression,” as though that is supposed to shut down the subject.
‍

In the “Under the Skin” podcast with Russell Brand last November, you said, “I’ve lived through periods of time that by any means today would be called clinical depression, but even that’s such a scam.”

I regret saying that. That was an uncareful comment, because it’s not always a scam at all.

I have met hundreds of people going through hell trying to get off antidepressants that should never have been prescribed to them. I’ve worked with people going through normal human crises since 1983. And I have seen what has been, in many cases, the devastating effects of overprescription.

You’ve emphasized before that there’s no blood test for clinical depression, which seems to imply that the distinction is arbitrary and one can’t cleanly tell the difference.

First of all, let’s talk about all the times someone is told they’re clinically depressed by their gynecologist. People throw around that term these days. And even when people say, “Oh, there’s brain chemistry” — yes, I understand that there’s brain chemistry involved. But we’ve also seen changes in brain chemistry from yoga, from meditation, from prayer. I don’t see where an intelligent questioning about what is happening here should be derided.
‍

On antidepressants: ‘We are a depressed society’
‍
At this point, we turned to Ms. Williamson’s comments about antidepressants and suicide, particularly one she made the day the designer Kate Spade killed herself: “How many public personalities on antidepressants have to hang themselves before the F.D.A. does something, Big Pharma cops to what it knows, and the average person stops falling for this?” There was no public evidence that Ms. Spade had been taking antidepressants.

The Food and Drug Administration has stated for years that certain types of antidepressants may increase the risk of suicidal thoughts in people 24 and younger. Its warning instructs doctors to weigh this alongside the drugs’ potential benefits and to monitor patients closely, but also says that studies show no similar risk in people over 24, and that untreated depression is itself a risk factor for suicide.

Asked if she stood by her comment, Ms. Williamson paused for several seconds before answering: “Yes. What in that statement is not true? Because what I say is the F.D.A. knows this. Big Pharma knows this. Intelligent people know this.”

‍
If I read, “How many public personalities on antidepressants have to hang themselves before the F.D.A. does something,” the message I get is “antidepressants are incredibly dangerous and you should not take them.”

I’m sorry that that’s what you get from the tweet. My sense is not that people would read that tweet and think that they were incredibly dangerous. But if anything I say makes people slow down on this topic and have a more serious conversation, particularly when it comes to teenagers, then I’m glad I helped introduce the conversation.
‍

Do you worry that people with mental illnesses could see your statements and take them to mean they shouldn’t see a psychiatrist?

I don’t think that anyone who hears me lecture — I’m so careful.
‍

The people reading your tweets aren’t all the same people attending your lectures, though.

But then — the vast majority of people — that’s kind of my point. We are a depressed society. There are things that are deeply wrong in this society, and it is making people depressed. The problem is that in too many cases, somebody goes to therapy and the therapist says, “What’s going on in your life that you’re so depressed?” We need more of a conversation about why whole swaths of society are depressed. We have to talk about the role of economic injustice, chronic economic tension and anxiety.

We can’t even use the word anymore without the suggestion, “You’re talking about some serious mental illness.” There’s depression that is not mental illness. So you’re saying, aren’t I worried that people who are seriously mentally ill would see that tweet and take it to mean they shouldn’t — what I’m worried about are all the people who are not seriously mentally ill, who are hearing antidepressants talked about as though it’s not a very serious decision.

‍
Can’t you worry about both?

Yeah, absolutely. So then the question is, should I have not made that tweet?
‍
‍
If an argument is more nuanced than can fit in a tweet, and you try to put it in one, that nuance gets lost. But people still read it.

I think that is a legitimate challenge to me. I feel in my career that I have been very careful. And what I hear you saying is that I should be more careful with Twitter. God knows in the last few weeks, you’d better believe I looked at tweets and regretted it.

I can see now that Twitter is not the best place to weigh in on such a serious topic. There, yes, I think you’re right.