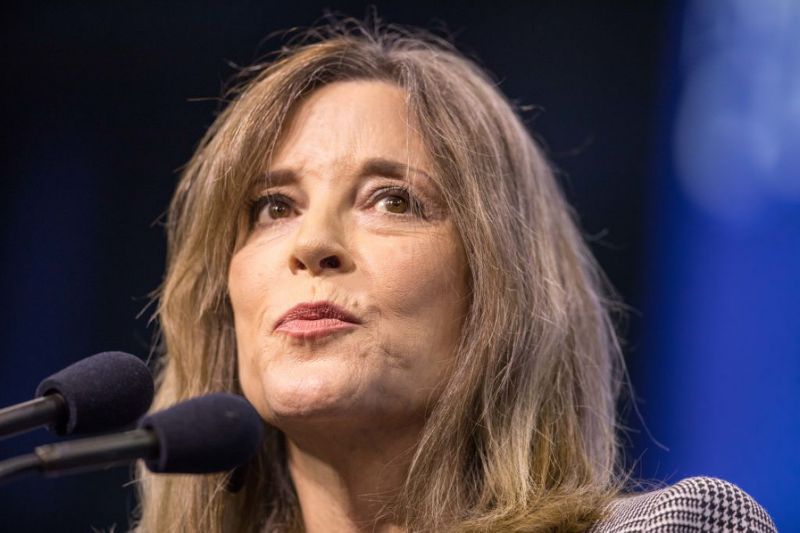 Last night’s Democratic presidential debate was the first of the 2020 campaign not to feature Marianne Williamson. It’s unlikely that many Democrats missed her. Her net favorability rating is just above Bill De Blasio’s.

Conservatives feel differently. It’s safe to say that among the Democratic candidates, she is (was? I will hopefully use the present tense here) the right’s favorite. Some of that is undoubtedly trolling; Williamson’s New Agey shtick plays into a certain stereotype of the loopy liberal. But not all of it is trolling.

Why are conservatives so smitten? I have a few theories.

The first is Williamson’s unabashed use of the language of faith. Republicans are more likely to be formally religious than Democrats. Some take her invocation of angels, demons and miracles as a literal and necessary diagnosis of what ails America. But even not-so-religious conservatives are typically more comfortable with the language of the supernatural than their progressive counterparts. As Taffy Brodesser-Akner eloquently puts it:

The people who sought Williamson understood her language of angels and demons and miracles. They understood that those things didn’t take place on an unproven plane of the universe: The angels were our decisions to do better; the demons were our resolve to never try; and the miracle was just that tiny shift in perspective, that tilt toward love, that would change the way we think and act and believe.

That dovetails with the conservative belief that empowerment, however much aided by the state, is ultimately a personal affair. It also contrasts with the unbridled technocracy that conservatives and libertarians find misguided at best and dangerous at worst.

“If you think we are going to beat Donald Trump by just having all these plans,” Williamson said in a June debate, “you’ve got another thing coming.” Progressives seem to disagree. Elizabeth Warren has vaulted into second place in a crowded field by releasing a plan for everything. Conservatives, particularly of the never-Trump variety, are considerably less impressed with Warren’s wonkish resolve.

Trump’s erratic style is frightening, but the belief — the faith — that careful and caring bureaucrats can solve all of America’s problems is horrifying. I am reminded of Ronald Reagan’s famous quip: “The nine most terrifying words in the English language are: I’m from the government and I’m here to help.”

Conservatives today are far more open to the idea that government can play a constructive role. Yet they still believe that the nature of that role should be to lift up individuals, not prescribe outcomes.

Williamson may favor progressive solutions such as Medicare for All, stricter environmental regulations and universal preschool. She largely endorses Bernie Sanders’s platform, after all. Yet for conservatives, her call to arms can easily be read as support for charter schools, housing deregulation and generous tax credits for working parents.

There is a universality in her message that is rare in 21st-century politics. Equally important, it is framed in the language of aspiration and American exceptionalism rather than grievance and collective guilt. It echoes Reagan’s “shining city upon a hill” speech and, to a lesser extent, Barack Obama’s “Yes We Can” mantra.

Williamson’s magic even makes reparations sound conservative. Paying them would not be financial assistance, she said, or an attempt to right centuries of wrongdoing. It would be payment of a specific debt on the part of the U.S. government, which has never been paid, at a rate of return that was both dignified to the recipients and reasonable to the taxpayer. Williamson didn’t invent this framing, but she deploys it to great effect.

That type of unifying vision is the most valuable attribute a president can have — and one the current president most sorely lacks. Policy disputes will be hashed out in a messy debate between the 60th and 61st least liberal or conservative senators, depending on which party has a majority. Even under united government, the ambitions of the president are beholden to the filibuster.

Statecraft is soulcraft, George Will wrote early in his career. He held to that maxim even as his politics tilted ever more libertarian. Democratic voters may find Marianne Williamson’s self-help brand of spirituality hokey and unserious. But her message could be the chicken soup America’s soul so desperately needs.