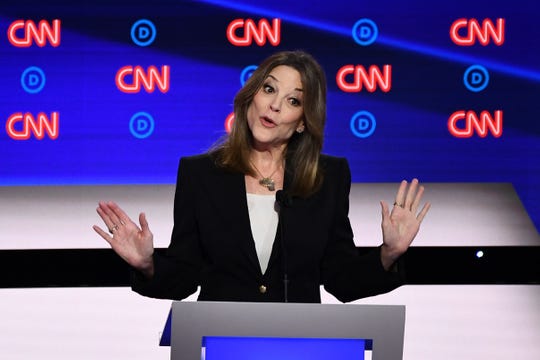 It turns out Marianne Williamson isn’t just some kook who levitated into the presidential debates through the sheer force of love.

On Tuesday night, she wowed the crowd with her well thought out expositions on race, the Flint water crisis, gun safety, reparations and the “dark psychic force of the collectivized hatred” that President Donald Trump has unleashed on this country.

Political observers seemed stunned to hear the best-selling author and teacher speaking so eloquently on issues near and dear to the average Democratic voter’s heart. They shouldn’t have been. A quick visit to her website or a Google search could have disabused them of the idea that she’s a dingbat interloper in the Democratic race.

But why do research when you can snark and mock instead?

Full disclosure: Williamson is a friend, so I have been well aware of her brilliant mind, well-honed worldview and deep thinking around the most important issues we face as a nation. I’ve been frustrated watching her be denigrated and caricatured based on a profound ignorance of her experience and abilities.

Meanwhile, the various random men who have decided they should be president and who have almost no chance of winning (yes, I’m looking at you, John Delaney, Tim Ryan and Steve Bullock) have been spared the mocking heaped upon Williamson.

John Harwood tweeted, “Sorry, but Marianne Williamson does not belong on that stage.” A Salon.com piece deemed her “kooky” and nominated her for “secretary of Crystals.” Memes about Williamson and orbsabound, though she told an interviewer recently she isn’t even sure what an orb is.

Rolling Stone ran an article outlining “11 absolutely bonkers things you should know about Marianne Williamson.” Among the shocking disclosures: She helped rocker Steven Tyler get off drugs, loved the movie "Avatar," spent part of her youth dabbling in "bad boys and good dope” and once lived in a commune. Perhaps these things would make the “bonkers” list in the Focus on the Family newsletter, but isn’t Rolling Stone supposed be a little edgier than that?

'Kooky' is better than misguided wars

Eyes roll when she talks of establishing a Department of Peace. Waging peace is nutty to the political gatekeepers, but invading country after country with disastrous results is sober-minded leadership. The front-runner for the Democratic nomination, Joe Biden, voted for a war to invade a country that had never attacked us and had nothing to do with 9/11. We will be dealing with the consequences of that decision for generations. But Williamson is the crazy one, with all her talk of harnessing love and waging peace.

Like Vermont Sen. Bernie Sanders and Massachusetts Sen. Elizabeth Warren, Williamson is delivering a hard-nosed critique of the state of our country. She isn’t interested in nibbling around the edges because she recognizes that we are a country in crisis and that crisis goes well beyond the election of Donald Trump. She has pointed out many times that the United States has devolved "from a democracy to a veiled aristocracy." She has dinged the political establishment for ignoring the political revolution that was brewing under their feet and led to the election of Donald Trump.

She most recently has come under fire for criticizing the overprescription of anti-depressants. Any sentient being knows that pharmaceutical companies are predatory and not to be trusted. As a ProPublica article said of the Food and Drug Administration, “In 2017, pharma paid 75% — or $905 million — of the agency's scientific review budgets for branded and generic drugs.” The fox is guarding the henhouse.

Snarking at a spiritual worldview

n the rush to defend Big Pharma, many missed Williamson’s primary point, which was a critique of a culture that has left people feeling disconnected from one another and without a social safety net. Perhaps all of our anxiety is not caused by broken brains but by working nonstop, missing out on time with our friends and families because we are all so busy “hustling” and “grinding” just to survive in an immoral economic system skewed to favor a very few at the top while leaving the rest of the country to fend for itself.

By all means, if you have a chemical imbalance, use medication. But that doesn’t mean we shouldn’t be allowed to have a broader conversation about the pharmaceutical industry and the deep structural flaws in our economic system.

I would be remiss if I didn’t point out that much of the snark directed at Williamson is due to her spiritual worldview. “The Democratic Party sort of lost the thread in terms of talking about the spiritual dimension,” Williamson told me in an interview Tuesday in Detroit.

“I talk to Democrats all the time who are deeply involved in their religious and spiritual lives. The problem isn't, once again, the rank-and-file Democrats. The problem is this megaphone in the hands of a corporate Democratic leadership machine that, yes, has adopted over the last few decades such an overly corporatist, secularized language that it makes many people of faith feel invalidated. The projection onto me that I'm some kind of New Age nutcase, for no other reason than that I'm a woman who values prayer and meditation, pretty much says it all.”

In our interview, Williamson delved into the issue of the political realm being locked in what she calls 20th century thinking, which ignores the “psychological, emotional and spiritual factors that affect us and that drive us.” She contrasted this way of thinking with a 21st century mindset that is “far more holistic and whole-person than was the 20th century.”

Most of us recognize that a holistic perspective has taken hold in medicine, education, business and even science. “This is not some radical fringe idea,” she said. “This is 21st century thinking, but the one major corner of the society that doesn't seem to have gotten the memo is politics. Modern politics is stuck in this late 20th century overly secularized mindset that is so entrenched. In its arrogance, it points to everyone else as fringe. In its blindness it doesn't realize, no, the civilization has moved ahead. You guys are behind, and you are increasingly fringe.”

Call me crazy, but I think Williamson's on to something.