Establish a U.S. Department of Peace

A U.S. Department of Peace is a major step in dismantling America's
systemically entrenched culture of violence.
‍ 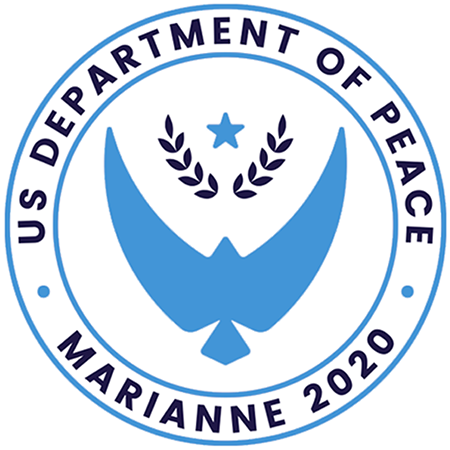 I want to talk to you about waging peace.

From millions of chronically traumatized children to mass incarceration to family separation at the border, the United States has no more serious problem than the problem of violence itself.

And yet, even as the current administration starves the international peace-building capacities of the State Department, we have no federal platform from which to seriously wage peace domestically.

Through support of my candidacy for president of the United States, you can help alter the course of our nation and model peace for our world.When I become president, I will establish a U.S. Department of Peace.

‍This campaign to establish a U.S. Department of Peace is the first step in dismantling our systemically entrenched perpetuation of violence. And it is critical.

‍Our current administration actively cuts peace-building programs that are statistically proven to increase the incidence of peace and reduce conflict, despite their efficacy. These programs represent expanded economic opportunities for women, expanded educational opportunities for children, reduction of violence against women, and the amelioration of unnecessary human suffering wherever possible.

We should see large groups of desperate people as a national security risk. In doing right by our fellow human beings, we will pave the way to a better world.

‍I believe Americans are ready to do the right thing.

This is why I will make peace-creation a signature of my presidency. Sign today if you agree that there should be a US Department of Peace.

Our country's priorities are clearly reflected in our budget. The Defense Department has a military budget of $718 billion – almost larger than that of all other nations combined – while our State Department budget – including all peace-creation agencies – is $40 billion. The independent U.S. Institute of Peace has a budget of only $36.8 million.

Domestically, we need to similarly disrupt patterns of violence. Join me in support for building a U.S. Department of Peace to address issues of peace-building here at home – trauma-informed education, community wrap-around services, restorative justice, conflict resolution, mindfulness in the schools, violence prevention programs, and more.

When I am president, the world will know that America's greatest ally is humanity itself. Let us restore our position as a moral leader both here and abroad. Far more Americans love than hate, but we must display our love with a renewed commitment and serious conviction. Together, we can and we will.

With love for all,
Marianne

Paid for by Marianne Williamson for president